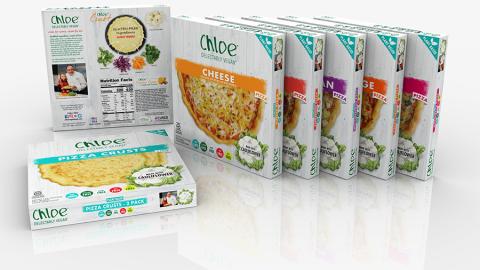 Chloe Vegan Foods LLC has launched a full line of frozen plant-based pizzas. Manufactured in an FDA- and USDA-approved facility, the non-GMO products are 100% free of the most pervasive allergens (milk, wheat, soy, egg, nuts and fish). According to the company, a highlight of the line “is the quantum leap forward in the quality, flavor, texture and behavior of [its] patent-pending cauliflower-based cheese” in mozzarella and cheddar varieties, which also shreds and melts like dairy-based cheese, making the experience of eating a Chloe pizza far closer to that of eating a conventional pie. The product line comes in Cheese, featuring a gluten-free crust; Italian Sausage, blending beans, beets, peppers, mushrooms and natural spices atop a vegetable-infused crust; Pepperoni, with mushrooms, oil and spices on a vegetable-infused crust; Margherita, containing olive oil, garlic, basil and diced tomatoes paired with a vegetable-infused crust; Mediterranean, crafted with diced red peppers, artichoke hearts, yellow onion and black olives on a vegetable-infused crust; and Pizza Crust Two-Pack, enabling consumers to build their own pizzas on a gluten- and allergen-free crust made with broccoli, cabbage, carrots, kale and cauliflower. All of the line’s items retail for a suggested $9.99 per approximately 10-ounce box. Chloe will also offer branded shredded vegan cheese and meatless pepperoni and meatless sausage to help shoppers create their own pies. The eponymous brand was founded by parents whose daughter, Chloe, has eosinophilic esophagitis, a condition that makes it dangerous, even deadly, to eat certain foods, so they sought to develop a line of products she could eat safely that would provide nutrition, and allow her to eat the same foods as her family.

The Most Oreo Oreo