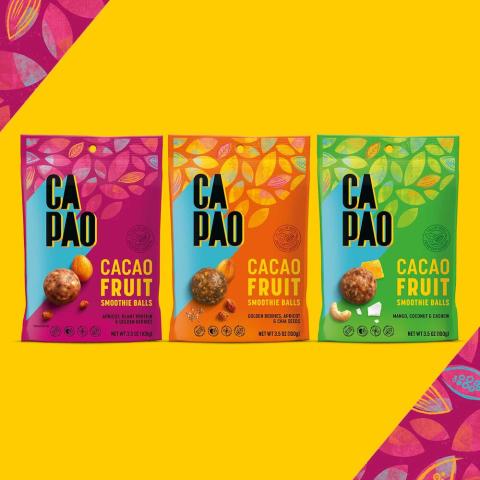 Crafted from cacaofruit, an ancient South American “wonderfruit” best known for containing the cocoa beans from which chocolate is made, and, to a lesser extent, for its skin-nourishing cocoa butter, CaPao Cacaofruit Smoothie Balls make ample use of the 75% of the fruit that’s often discarded. Cacaofruit contains many nutrients, vitamins and minerals, among them potassium, magnesium, iron and fiber, and offers a unique flavor. “By using more of the cacaofruit, we are supporting the well-being of people and the planet by rescuing wasted nutrition, wasted food and also helping the cacao farming communities thrive and prosper,” explained CaPao creator SnackFutures, Mondelēz International’s independent innovation and venture hub. Smoothie Balls are made from cacaofruit pulp, other fruits, nuts and seeds to deliver added nourishment and a chewy texture. Available in three varieties -- Mango, Coconut & Cashew; Golden Berries, Apricot & Chia Seeds; and Apricot, Plant Protein & Golden Berries -- the vegan-friendly, gluten-free, non-GMO snack without any artificial colors, flavors or preservatives can be enjoyed any time of day in various ways, including as an ingredient in a smoothie, giving rise to the name. Since its original introduction, the product has made such improvements as slashing its sugar content by 50% per serving and reducing the amount of its packaging and plastic, which are still 100% recyclable. CaPao Smoothie Balls retail for a suggested $5.49 per for a multiserve 3.5-ounce bag and a suggested $1.49 per single-serve pack.