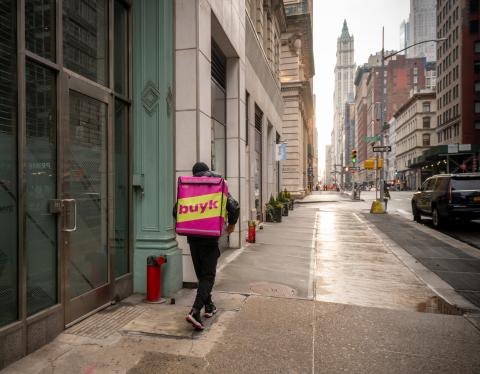 About 98% of Buyk's riders have been let go following sanctions levied against the company's Russian investors.

Russian-made vodka isn’t the only grocery industry casualty of the crisis in Ukraine. The spiraling conflict is hitting close to home for Buyk’s operations in the Western world, as the Russian-backed rapid delivery platform has been drastically impacted by sanctions imposed in the wake of the invasion. The company was founded by Russian entrepreneurs Slava Bocharov and Rodion Shishkov, who first got into the sector when they launched the ultrafast delivery platform Samokat in St. Petersburg.

According to information released by Buyk, the startup temporarily let go of almost all of its riders during the first week of March. Cut off from much of its funding, the company’s existing operations – as well as its ambitious plans for future expansion in the United States – have been put on ice for now.

James Walker, CEO of Buyk, explained the situation in a statement to news outlets. “Our founders Slava Bocharov and Rodion Shishkov have been providing bridge financing to Buyk until we close our next investment round. However, the restrictions [Russian President Vladimir] Putin has imposed in response to U.S. sanctions have made this bridge financing setup untenable, despite neither of our founders being sanctioned,” he declared.

As the grip of sanctions tightens, Buyk is seeking alternate funding to move ahead in its business here. According to Walker, Buyk and its leaders are working to move all of its funding to the United States. “As of today, our assets still greatly exceed our liabilities, and we remain confident that Buyk’s proven ultrafast grocery model can make real-time retail a reality in the United States,” he added.

However, not long after making that statement, Walker was said to be furloughed as well. Citing internal employee communications, media sources in New York claimed on Tuesday, March 8 that the CEO has been put on leave while the founders take time to determine their next steps.

Meanwhile, Buyk’s social media pages include a plea for stability. In a March 1 Facebook post, the company wrote, “Buyk wishes to bring more attention to the voices in Ukraine that must be heard today. So we’ll be taking a break from posting.  The Buyk team stands for world peace and unity among nations.”