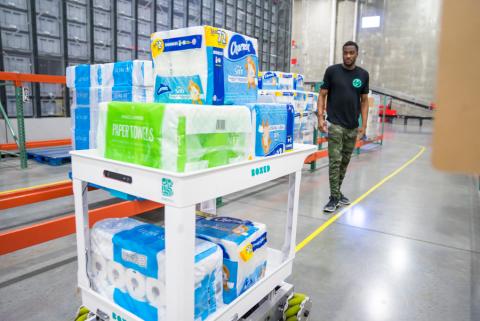 Boxed, the bulk-shopping ecommerce retailer geared toward “updating the Costco experience for Millennials,” is implementing in its Dallas fulfillment center its autonomously guided vehicle (AGV), a lightweight, transportable alternative to larger-scale conveyor-belt systems.

Developed in-house, AGVs require significantly less capital expenditure than their heavier counterparts, and are designed to autonomously roam the aisles of Boxed’s fulfillment centers, relieving order pickers of the need to  manually locate items and push a cart throughout their workday. The system can be easily upgraded and implemented, enabling Boxed to rapidly spin up a partially automated facility wherever new pockets of consumer demand arises.

Boxed spent nine months developing the AGV hardware and software. The AGVs themselves are built in-house in its Union, N.J. facility, at a cost of about $6,000 each. This makes it possible for Boxed to quickly develop a fulfillment center that can handle up to $100 million in order volume with an initial expenditure of of roughly $800,000.

Through unique technological innovations, Boxed is working hard to be a serious competitor in the increasingly competitive grocery ecommerce market. In the last year alone, the company has introduced a platform designed to predict the needs of shoppers and fulfill their orders automatically, entered fresh delivery, brought product expiration dates online, added chatbot and group ordering,and introduced a tool that helps users plan pantry storage via augmented reality.

The company has even captured the interest of food retailers looking to boost their ecommerce operations as Amazon moves further into the online grocery space. A number of "major retailers," including Kroger, were showing interest in the retailer earlier this year, several sources reported in January. Not long after, however, Boxed was said to have turned down an offer from the Cincinnati-based grocery giant, declining a bid somewhere between $300 million and $400 million.