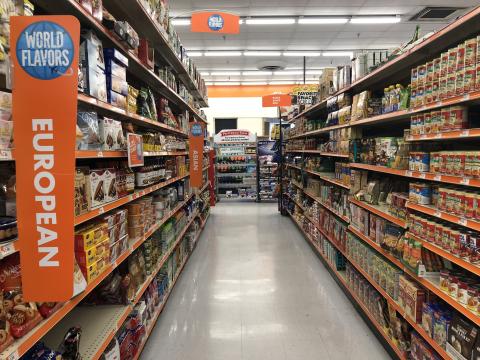 Deep-discounter Big Lots has reported higher profit and sales in its third quarter, despite a slowdown in customer traffic and an initiative to reconfigure its grocery assortment.

The retailer said that same-store sales were flat during the quarter ended Nov. 2.

During an earnings call, Big Lots President and CEO Bruce Thorn said that the company plans to devote more space to higher-margin consumables such as snacks and cleaning supplies, and less space to lower-margin food pantry staples such as ketchup.

“Part of our Traffic Drivers Initiative focuses on reconfiguring our food and consumables assortments to strike the right balance between surprise and delight values from closeouts in every aisle,” Thorn said. “To support this product mix, rebalancing footage from food staple items will be reallocated to food, entertainment and consumables. Our current coolers, which typically occupy approximately 20 linear feet and are low productivity, low margin and expensive to maintain, will be replaced by a smaller end cap cooler. The extra square footage will be allocated to more productive categories, all while maintaining our eligibility to accept SNAP and CBT as a form of payment.”

Those “more productive” categories will include salty snacks, beverages, cleaning products and other consumables, according to the company.

Big Lots said that it expects Q4 profit of $2.40 to $2.55 per share and a slight rise in same-store sales. Thorn noted during the call that the retailer anticipates an increase in its earnings per share (EPS) and earnings before interest and taxes (EBIT) in the coming year.

“After a year of restructuring and transition in 2019, and despite the ongoing impact of tariffs, we expect to return to EBIT and EPS growth in 2020, including significant improvement in normalized free-cash flow," he said.