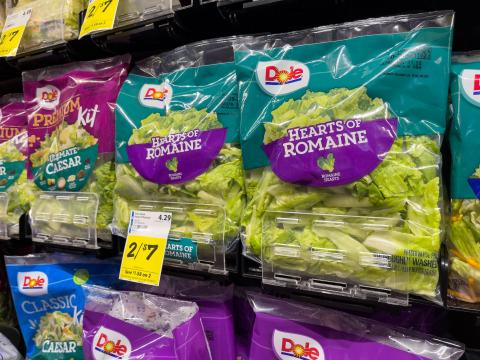 A recall of packaged salads from Dole spans items made for several store brands and is the latest in a series of salad recalls.

The latest recall affects products made at facilities in Springfield, Ohio, and Soledad, Calif. Sell-by dates range from Dec. 22, 2021 to Jan. 9, 2022. Salads from the Springfield batches have a code beginning with the letter “W” and items from Soledad lots have a code starting with “B.

Products from several brands are part of this recall, including the Dole brand and President’s Choice brands, and store brands from retailers including H-E-B, Kroger, Aldi and Walmart.

This is the latest in a series of bagged salad recalls. In December, Dole announced the recall of several packaged salad varieties produced by brands such as Ahold, Kroger, Lidl, Little Salad Bar, Marketside, Nature’s Promise and Simply Nature. That move was also due to a positive Listeria sample.

Also in December, an outbreak of Listeria in several states was linked to packaged salads made by Fresh Express. Several products made at the company’s facility in Streamwood, Ill., were recalled.