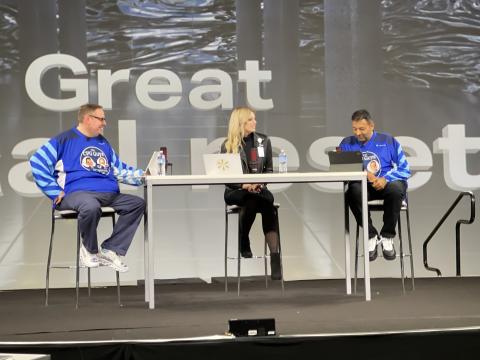 What does the next generation of food retail look like? Walmart and Amazon offered a blueprint for the future at NielsenIQ’s annual Consumer 360 (C360) event in Orlando, Fla., this week.

Whitney Cooper, senior director of omnichannel transformation and commercialization at Walmart, and Justin Honaman, head, of worldwide CPG and retail go-to-market at Amazon Web Services, both spoke at C360 (back in person after a two-year hiatus) and detailed how retailers must better leverage data, collaboration and personalization to capture the new “phygital” shopper.

Cooper, who appeared as the guest during a live podcast from The CPG Guys, said 69% of Walmart customers changed the way they shopped during the pandemic, and that the behavior is new and sticky. For Walmart, she said, catering to the digitally enabled in-store shopper is now more important than ever.

Cooper said retailers should have online reviews for fast moving consumer goods, as well as electronics and hard goods, because the data backs it up.

“And what's interesting about this, the 82%, it wasn't just once. They were viewing the data 2-4 times during the trip. So, when you're looking at the data in hand, it's kind of undeniable how important the content is,” Cooper said.

Cooper also spoke to Walmart’s new data business, called Luminate, which grew 75% during the first quarter, the retailer reported May 17. The shopper insights platform launched in October to provide a suite of data products to merchants and suppliers. Luminate joins the company’s other businesses such as Walmart Plus, Walmart Go Local and its retail media arm Walmart Connect, which all seek to leverage data to boost sales and margins over the long term.

“When it comes to the next generation of retail media, we've been in this thing now for three years. We've been super focused on creating best in class products for our advertisers to use to speak to our customers. Highly focused, obviously in the digital space,” Cooper said. “But when you think about what our value proposition is, the strength of our 4,700 stores and the network that we have, in order to really create awesome experiences for our customers, advertisers need to be able to speak to our customers in the stores.”

Amazon’s Honaman said the pandemic has created an opportunity for smaller brands to stand out and that retailers need to be focused on “creating an environment that gets the shopper in the store so then they're more likely to buy other products in the store, with multiple brands in the store.”

He also said some retailers will need to improve collaboration when it comes to data around forecasting, replenishment, merchandising and store ops.

“The legacy retailers have different silos and don't talk to one another, so that’s another big data challenge. The good news is the technology, analytics, and the skill sets have evolved pretty rapidly over the last couple of years, so I think you'll see a lot of evolution there. But that's an area that will be a priority for all of us in the industry over the next couple of years,” said Honaman.

Wes Schroll, the CEO and founder of Fetch Rewards, Inc., was also a speaker during C360 (which had about 500 attendees), and he said that as a result of the pandemic and the acceleration of digital, "the power has been transferred to the people," or customer, and that retailers and brands will have to be laser-focused on personalization to win the future.

“People are coming to the Fetch app not just for discounts but also for engaging content,” Schroll said. “People are looking for brands that are going to bring engagement in a new way that's actually meaningful and communicates to each of them in a way that makes sense. So I think you're going to see a combination of more of this hunger for entertainment, hunger for that type of connection, among shoppers.”

Bentonville, Ark.-based Walmart U.S. is No. 1 on The PG 100, Progressive Grocer’s 2022 list of the top food and consumables retailers in North America. Seattle-based Amazon is No. 2.