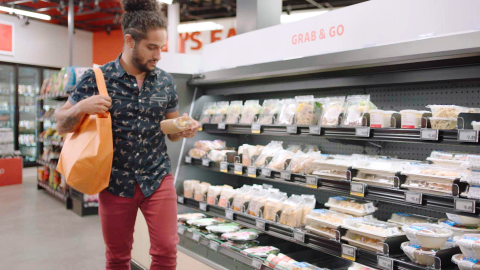 This month, Amazon opened a new, larger Amazon Go store format for customers in suburban areas in the U.S., in Mill Creek, Wash.

Amazon is accelerating the expansion of its physical food retail footprint across the U.S. even as it faces unprecedented inflationary pressures affecting its profits and operational costs.

While online sales were down 3% year-over-year to $51.1 billion, physical store sales, which include revenue from Whole Foods Market and Amazon Go stores, were up 17% to $4.6 billion. That number marks the company's fourth consecutive quarter of double-digit physical store sales increases.

In March, Amazon announced it would close its non-food retail formats to focus on grocery, and that's exactly what the company did in the first quarter.

The company announced it opened eight new Amazon Fresh grocery stores during the period and now has 46 Amazon Fresh stores around the world. According to Amazon, the newest Amazon Fresh store in Seattle is the world’s first grocery store seeking Zero Carbon certification from the International Future Living Institute and features more than a dozen store design upgrades expected to save nearly 185 tons of carbon emissions each year when compared to a traditional grocery store.

This month, Amazon opened a new, larger Amazon Go store format for customers in suburban areas in the U.S., in Mill Creek, Wash. The new format features Amazon’s Just Walk Out technology for a checkout-free shopping experience, an expanded selection of grab-and-go food and beverage items, and a made-to-order kitchen with freshly prepared, customizable breakfast and lunch items. Amazon says it plans to expand this format to the Los Angeles area in the coming months.

In first quarter, Amazon posted a net loss of $3.8 billion, the e-commerce giant's first quarterly loss since 2015. But the number included a pre-tax valuation loss of $7.6 billion related to the company's investment in electric vehicle maker Rivian Automotive Inc. Much of the company's profits during the first quarter came from Amazon Web Services, which was up 37% at $18.4 billion, with $6.5 billion in operating income. Meanwhile the retailer's growing advertising business also generated a big jump in revenue: $7.8 billion, up 23% over a year ago.

Looking ahead, expense pressures related to the war in Ukraine, labor costs, supply chain challenges and other factors led the company to forecast $116 billion to $121 billion in revenue for the second quarter. Operating income for second quarter is expected to range between a $1 billion loss and a $3 billion profit.

“The pandemic and subsequent war in Ukraine have brought unusual growth and challenges,” said Andy Jassy, Amazon CEO. “With AWS growing 34% annually over the last two years, and 37% year-over-year in the first quarter, AWS has been integral in helping companies weather the pandemic and move more of their workloads into the cloud. Our consumer business has grown 23% annually over the past two years, with extraordinary growth in 2020 of 39% year-over-year that necessitated doubling the size of our fulfillment network that we’d built over Amazon’s first 25 years — and doing so in just 24 months. Today, as we’re no longer chasing physical or staffing capacity, our teams are squarely focused on improving productivity and cost efficiencies throughout our fulfillment network. We know how to do this and have done it before. This may take some time, particularly as we work through ongoing inflationary and supply chain pressures, but we see encouraging progress on a number of customer experience dimensions, including delivery speed performance as we’re now approaching levels not seen since the months immediately preceding the pandemic in early 2020.”

During the first quarter, Amazon announced Buy with Prime, a new benefit for Prime members in the U.S. that extends the convenience of shopping with Prime to online stores beyond Amazon.com. Prime members can shop directly from participating merchants’ online stores using their Prime member benefits, including fast and free delivery, a seamless checkout experience, and free returns on eligible orders. Amazon also launched Amazon Aware, a new brand of consciously created everyday products that span apparel, home, and beauty, and that are made from materials such as recycled polyester, organic cotton, and bio-based ingredients. All Amazon Aware products are certified as carbon neutral and feature certifications that are part of Amazon’s Climate Pledge Friendly program.

This year, Prime Day will take place in July in more than 20 countries, the company said.

Seattle-based Amazon is No. 2 on Progressive Grocer’s 2021 list of the top food and consumables retailers in North America, while Austin, Texas-based Whole Foods, a wholly owned subsidiary of Amazon, is No. 26 on PG’s list.