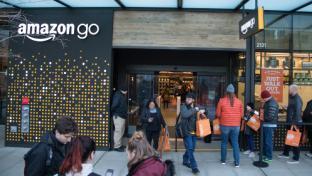 Amazon’s first Amazon Go location in Manhattan, and 12th overall, is also the first to break away from its cashless/cashier-less concept and feature an employee with a mobile device that will accept both cash and coins.

This shift comes a month after Amazon SVP Steve Kessel said that the company was looking at “additional payment mechanisms” to cater to shoppers without credit cards or bank accounts. Philadelphia and New Jersey already have laws in place banning cashless stores, while more cities are looking at such regulations.

Shoppers not paying with cash will simply walk in and out of the store with their Amazon apps to purchase items, as is practice at other Amazon Go locations.

The new 1,300-square-foot New York store is also notable for being the first on the East Coast. The store is located in Brookfield Place, near the World Trade Center and numerous other office buildings. All other Amazon Go stores are in San Francisco, Seattle and Chicago.

The new York location will carry grab-and-go food options suitable for the lunch crowd, as well as Amazon’s meal kits.

According to Bloomberg, Seattle-based Amazon plans to open as many as 3,000 Go stores by 2021.