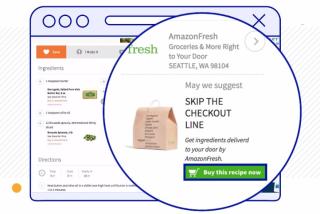 Amazon has teamed with Des Moines, Iowa-based media and marketing company Meredith Corp. to create shoppable recipes on AllRecipes.com, which can be fulfilled through the Seattle-based ecommerce giant’s Amazon Fresh delivery service.

Said to be the world’s largest digital food brand, AllRecipes.com now features an embedded button in its top recipes that allows home cooks to purchase a recipe’s ingredients and have them delivered to their homes with one click. Although the website has long incorporated grocery-shopping functionality into its site, including geo-targeted grocery offers from retailers nationwide, the introduction of Amazon Fresh as a featured retailer represents the site’s next major innovation for helping home cooks find and prepare meals with ease.

As one of the major food brands to collaborate with Amazon Fresh in this capacity, AllRecipes.com will curate the food brands selected for each recipe ingredient. However, shoppers may change any food brand in their carts once at the Amazon Fresh landing page while selecting their preferred delivery times (from the same day to the following morning).

While the launch has integrated Amazon Fresh into many of the highest-trafficked recipes on AllRecipes.com, over time, the new functionality will extend into all possible recipes on the site.

“We are proud to lead the way in food innovation for home cooks and for our brand partners,” said Meredith National Media Group President Jon Werther. “Millions of busy, family-focused home cooks come to Allrecipes.com every day to discover and plan their meals. Our integration with Amazon will make it it easier for millions of home cooks to order all of the ingredients needed for dinner that night or for a weekly meal plan – and have them delivered to their doorstep within hours. We’re providing an unparalleled level of convenience, and making it that much easier to turn the food inspiration our audience sees on Allrecipes into reality.”

The news marks another deal between Amazon and AllRecipes.com. One year ago, the ecommerce company introduced the AllRecipes Skill for Amazon Alexa, which allows users with Alexa-enabled devices to search for recipes and details via voice command, keeping busy hands free from looking up ingredients on tablets or phones. Users also can turn recipes into shopping lists on their smartphones with a simple command.

While this new announcement extends Amazon’s arrangement with AllRecipes.com into the ecommerce space, it’s not the first such joint effort between Amazon and a media company in recent times. In late October, Amazon teamed with Fexy Media – owner of such digital properties as Simply Recipes, Roadfood and Serious Eats – to add buttons on select recipes on Simply Recipes and Serious Eats’ sites that can, with a single click, add ingredients to a virtual cart and ship via Prime Now to users’ doorsteps within two hours.

The benefits of these services lie in the fact that food retailers are trying to drive attraction to, and adoption of, online grocery orders, better connecting products to consumers via recipes – or the shelf to the table, suggested Ken Yontz, global VP of transformation management at Chicago-based product information network 1WorldSync. So even though grocers have had difficulty combining content such as recipes and blog posts with transactional opportunities – often having two separate sites for ecommerce and for content – it’s more important than ever that they bridge the disconnect, added Chris Bryson, founder and CEO of Toronto-based ecommerce platform provider Unata. Partnerships for “Add to Cart” buttons on recipes – like Amazon’s deals with Meredith and Fexy, or similarly, Walmart's and Kroger’s respective partnerships with eMeals – are one way to do this.