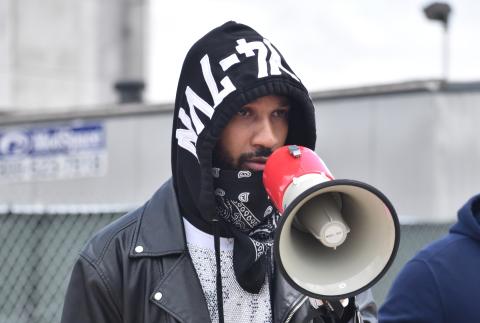 Former Amazon employee and Amazon Labor Union co-founder Christian Smalls at a May Day protest in front of the Amazon JFK8 warehouse in 2020.

Workers at a huge Amazon warehouse on New York’s Staten Island overwhelmingly voted to unionize, according to a report in The New York Times, which referred to the more than 10-percentage-point win as “a stunning win for a campaign targeting the country’s second-largest employer and one of the biggest victories for organized labor in a generation.”

The newspaper reported that more than 8,300 employees at the only Amazon fulfillment center in New York City, known as JFK8, cast 2,654 votes to be represented by Amazon Labor Union and 2,131 against.

The Staten Island vote arrived amid what’s looking like a narrow loss for the Retail, Wholesale and Department Store Union (RWDSU), an affiliate of the United Food and Commercial Workers International Union (UFCW), at an Amazon warehouse in Bessemer, Ala. The vote is so close that the results won’t be known for several weeks as contested ballots are litigated. At an election at the same warehouse a year earlier, the union was soundly defeated.

Amazon, which can challenge the vote on the grounds that the union’s conduct was improper, didn’t immediately comment on the vote. The company, which touts its $15-an-hour minimum wage and other worker benefits, campaigned aggressively against the formation of a union, texting employees and making attendance at anti-union meetings mandatory.

Christian Smalls, co-founder and president of the Amazon Labor Union, noted in the Times article that employees working through the stress of the pandemic were radicalized to the point where they wanted to form a union. Smalls was fired from Amazon after he helped lead a walkout in regard to safety measures in March 2020.

According to the publication, “The win on Staten Island could herald a new era for labor unions in the United States, which saw the portion of workers in unions drop last year to 10.3%, the lowest rate in decades, despite widespread labor shortages and pockets of successful labor activity.”

For his part, Marc Perrone, president of Washington, D.C.-based UFCW, noted that “these latest unionization efforts are just the beginning. It highlights the renewed power of workers, and the determination of America’s entire labor movement, to build a better and more just America.”

The vote at JFK8 began on March 25 and lasted five days. Another Amazon Labor Union election at a nearby Staten Island facility is slated for late this month.

Seattle-based Amazon is No. 2 on Progressive Grocer’s 2021 list of the top food and consumables retailers in North America, while its Austin, Texas-based Whole Foods Market subsidiary is No. 26 on PG’s list.