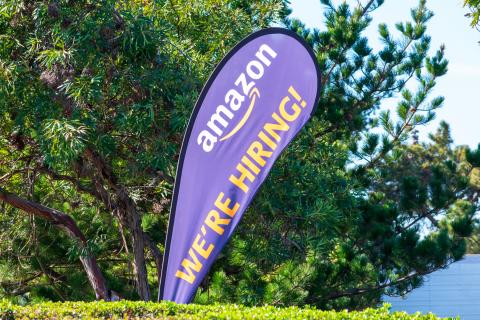 Amazon now directly employs one-third of all warehouse employees in the country, up from one-quarter before the pandemic.

The United Foods and Commercial Workers International Union (UFCW) has joined a coalition of major labor unions in filing a complaint with the Federal Trade Commission alleging that Amazon’s growing anti-competitive behavior is risking the health and safety of its employees amid the coronavirus pandemic.

“Amazon represents a clear and present danger to American workers and our economy,” asserted UFCW International President Marc Perrone. “The company has not only refused to acknowledge the full impact of COVID-19 on its workers, it has exploited this pandemic to increase its market dominance as well as its power over employees throughout its distribution centers.”

Added Perrone: “With more than one-third of all warehouse workers in the U.S., Amazon has a responsibility to be a leader, and to be setting strong safety standards. Instead, Amazon has chosen to ignore the dangerous working conditions its workers continue to face every day. … As COVID-19 continues to endanger tens of thousands of these warehouse workers, federal and state government leaders must hold Amazon accountable for the dangerous working conditions in these facilities and do much more to ensure the health and safety of all of our country's front-line workers.”

The other unions to sign onto the complaint were the International Brotherhood of Teamsters, the Communications Workers of America, Service Employees International Union and Change to Win.

The complaint contains the following allegations:

“In the absence of immediate and decisive action to curb Amazon’s most abusive practices and its market power, a dominant Amazon — that edges out or undercuts competitors across a wide swath of industries, from consumer merchandise to movie content to delivery technology, and squeezes dry all the various players up and down its vertical supply chain — could be here to stay,” the complaint warns.

Based in Washington, D.C., UFCW is the largest private-sector union in the United States, representing 1.3 million professionals in the health care, grocery, meatpacking, food-processing, retail industries, among others. It has members in all 50 states, Canada and Puerto Rico.

Amazon has countered criticism of the working conditions in its fulfillment centers by taking such steps as offering bonuses, improving safety measures at its facilities, and opening health clinics for warehouse employees.

Seattle-based Amazon is No. 2 on Progressive Grocer’s 2020 PG 100 list of the top food and consumables retailers in North America.