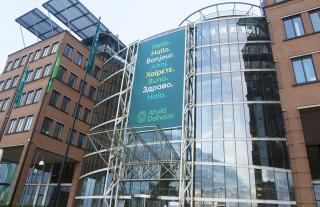 Food retailers such as Ahold Delhaize are increasing upping their sustainability game.

The sustainability trend is going strong in food retail, and the latest example of that comes from Ahold Delhaize.

On Tuesday it said that the “full proceeds of the company’s first Sustainability Bond have been used to support the increased consumption of sustainably sourced products, further reduce the company’s climate impact and increase sales of healthier products.”

Ahold Delhaize said it raised about 600 million euros in June of 2019 (worth about $673.5 million today) “through the issuance of a Sustainability Bond maturing on June 26, 2025. The transaction made Ahold Delhaize the first retailer to issue a euro-denominated Sustainability Bond, highlighting the company’s commitment to accelerate the transition to sustainable food systems.”

The food retailer said most of the bond — about 432 million euros, or approximately $485 million at current exchange rates — “were used to further expand sourcing of sustainable seafood, coffee, tea, and cocoa. In addition, some of the proceeds were allocated to the production cost of the ‘Urban Farm’ on the roof of a Delhaize Belgium store.” Other money went toward “renewable energy installations, energy efficient equipment, refrigeration improvements, and green buildings.

“Through this first experience in connecting our health and sustainability ambitions with company financing, we learned there are many investors who are both eager to support the transition to a more sustainable food future and share with us their learnings,” said Miguel Silva Gonzalez, senior vice president and treasurer for Ahold Delhaize. “Those learnings informed our recent sustainability actions, and we’re very optimistic about future potential for sustainability-linked financing.”

Earlier in June, Ahold Delhaize released its first “Human Rights Report.” In the report, Ahold Delhaize said it “has identified six salient human rights issues that it will focus on as initial priorities, followed by six additional relevant issues. Furthermore, Ahold Delhaize is strengthening its governance to ensure human rights are fully embedded within its strategy and to support the brands as they ensure that the protection of human rights is an integral part of their business activities.”