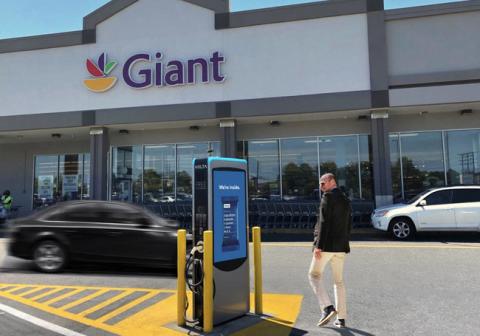 Giant Food said Tuesday that it is installing electric vehicle (EV) charging stations that drivers can use for free. The deployments are happening at Giant store locations in Washington, D.C., Virginia, Maryland and Delaware.

“Working with Volta, the industry leader in electric vehicle charging networks, installation of 60 EV charging stations will be completed by the end of 2020, and 200 are expected to be installed by mid 2021 as part of Giant's sustainability initiative,” the food retailer said.

Each of the selected locations will have two Volta charging stations — and each of those stations include “high-resolution, two-sided 55-inch high-definition displays,” Giant Food said. Screens will serve as a point of shopper engagement, sharing featured in-store specials and promotions for Giant loyalty shoppers.

Giant Food joins a trend that started a few years ago when retailers — food and other types — started to install charging stations as more consumers bought electric vehicles. Whole Foods and Walmart are among the leaders of this trend. Walmart’s effort started about two years ago and has resulted in most charging stations being deployedat Walmart stores off major highways and in major metro areas. That retail chain has worked with Electrify America on those efforts.

More recently, Choice Market said its newest store, scheduled to open July 1 in Denver’s City Park neighborhood will have supercharging stations for customers with electric cars (along with fuel pumps for other automobiles). But that’s not all. Choice Market also said the new store in Denver will have a fleet of electric vehicles to fulfill orders from a mobile app and e-commerce website — a reflection of how two trends are coming together in the food retail world.

As for Giant Food, its new charging stations meet growing demands from consumers for a new type of commerce.

"Providing our shoppers and communities free electric charging services is part of Giant's larger sustainability efforts," said Ira Kress, president of Giant Food. "We are excited to offer our customers who opt for electric cars the satisfaction of quick and free charging while they shop.  It's a value for our shoppers that also benefits the environment."

Giant Food is based in Landover, Md., and operates 164 supermarkets in Virginia, Maryland, Delaware and the District of Columbia with approximately 20,000 associates. Parent company Ahold Delhaize USA is No. 11 on The PG 100, Progressive Grocer's 2020 list of the top food retailers in North America.