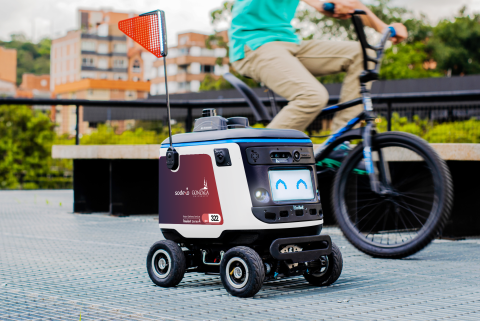 In yet another example of how robot food delivery is gaining traction in the United States, Kiwibot, a robotic last-mile delivery company, has teamed with foodservice and facilities management company Sodexo North America to begin offering the service at three university campuses this month: New Mexico State University; Loyola Marymount University, in California; and Gonzaga University, in Washington state.

The companies envision a subscription program in which every person at a Sodexo-serviced location can access any goods that can fit into a robot, and are located within a university campus.

At the three universities noted above, students will be able to use their meal plans to take advantage of Kiwibot delivery through their local delivery app, Bite+, although anyone with access to the app can use the service, with each delivery having a flat cost of $2, plus 10% of the order size.

In 2017, Kiwibot launched a pilot at the University of California-Berkeley campus. After completing more than 150,000 deliveries at Berkeley, with product development and testing for the business-to-consumer model, Kiwibot expanded to San Jose and Santa Monica, Calif.; Denver; Dallas; Taipei; and Medellin, Colombia, with a new business-to-business business model and partners.

“Our success comes from incredible customers like Sodexo who are willing to change the status quo,” said Felipe Chávez Cortés, CEO and co-founder of Kiwibot, which has offices in Los Angeles and Medellin. “This is just the beginning of our offerings to college students to test out the latest in robotic food delivery, and provide universities across the U.S. with the future of smart campuses.”

“We are excited to grow our robot food delivery service with Kiwibot and provide customers with a safe, convenient, contactless and innovative solution,” noted Aurelia Valot, VP of digital transformation and innovation at Issy-les-Moulineaux, France-based Sodexo, which has 420,000 employees and serves more than 100 million customers in 64 countries. “We are looking forward to expanding this offering in the coming months.”

Since its launch in 2017, Kiwibot has completed more than 150,000 food deliveries and built 400 robots. The company aims to develop the world’s largest robotic fleet and most convenient delivery service.

Other recent robot delivery rollouts include a test undertaken by c-store operator Urban Value Corner Store in Dallas, in collaboration with Tortoise and Vroom Delivery, while grocers Albertsons Cos. (also with Tortoise) and Save Mart have also introduced robot deliveries on a trial basis.

Boise, Idaho-based Albertsons operates 2,277 retail stores with 1,725 pharmacies, 400 associated fuel centers, 22 dedicated distribution centers and 20 manufacturing facilities. The company’s stores predominantly operate under the Albertsons, Safeway, Vons, Pavilions, Randalls, Tom Thumb, Carrs, Jewel-Osco, Acme, Shaw’s, Star Market, United Supermarkets, Kings Food Markets and Haggen banners. Albertsons is No. 8 on The PG 100, Progressive Grocer’s 2021 list of the top food and consumables retailers in North America. Based in Modesto, Calif., The Save Mart Cos. operates 203 retail stores under the banners of Save Mart, Lucky/Lucky California and FoodMaxx, and is No. 51 on The PG 100.