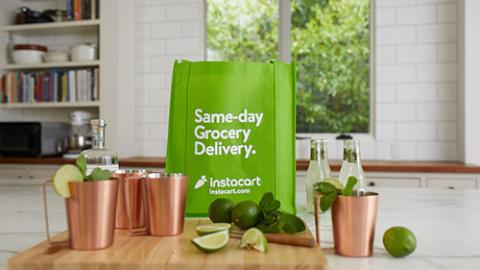 Instacart keeps expanding its offerings and reach as it reportedly considers the use of robots.

As Instacart continues to become a bigger part of consumers’ lives, the grocery delivery service could turn to robots to help with its warehouse load, according to the Financial Times.

The newspaper reports that “For almost a year, the company has been researching ways to automate the picking process. Last spring, Instacart sent out proposal requests to at least five companies that offer robotic systems that would pick goods from purpose-built ‘dark’ warehouses instead of store shelves.”

As the Financial Times put it, such a move could “revolutionize” Instacart, which has enjoyed massive growth during the pandemic. “It is also likely to revive fears among its grocery store partners that the company may one day attempt to go it alone, buoyed by years of insights from shopping data, a claim that Instacart has strongly and repeatedly denied.”

The report comes as Instacart made another move that demonstrates its expansion.

Walgreens is expanding on-demand delivery with Instacart to residents across Illinois, with plans to roll out the service nationwide to nearly 8,000 stores over the coming weeks. Customers can now find tens of thousands of Walgreens favorites, including over-the-counter medications, health and wellness, beauty and personal care, household essentials, and fresh and dry grocery for delivery via Instacart in as fast as an hour.

Indeed, that service expansion followed previous news that Instacart — on track for an initial public offering — struck a deal to acquire more than 250 patents from IBM. Financial terms were not disclosed, nor did either company give details about the patents in question.

Instacart has partnered with nearly 600 national, regional and local retailers, including unique brand names, to deliver from more than 45,000 stores across more than 5,500 cities in North America.

The delivery service's reported interest in robots and more efficient fulfillment reflect larger food retail trends gaining speed in 2021. Robots are more often taking on the task of cleaning grocery stores, and are now being given responsibility to promote candy and other items normally found in checkout lanes.

Meanwhile, food retailers are deploying cutting-edge logistical technology, in large part to keep up with the rocketing growth of grocery e-commerce, a trend fueled by the pandemic but which also is growing due to other factors. For instance, Peapod Digital Labs, Ahold Delhaize USA’s digital, e-commerce and commercial engine, has launched a micro-fulfillment technology pilot with The Giant Co. in the Philadelphia market. The pilot rolls out as Ahold Delhaize USA companies continue to expand their e-commerce fulfillment capabilities in support of a stronger omnichannel supply chain.

Deerfield, Illinois-based Walgreens is included in the Retail Pharmacy USA division of Walgreens Boots Alliance Inc., operating more than 9,000 retail locations across the United States, Puerto Rico and the U.S. Virgin Islands. It is No. 4 on The PG 100, Progressive Grocer’s 2020 list of the top food and consumables retailers in North America. Ahold Delhaize USA, a division of Zaandam, Netherlands-based Ahold Delhaize, is the parent company for Ahold Delhaize’s U.S. companies. Operating more than 2,000 stores across 23 states, Ahold Delhaize USA is No. 11 on The PG 100.