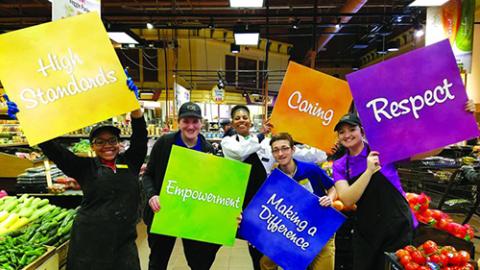 A Wegmans employee told Great Place to Work, "I feel a unique sense of opportunity in this workspace, as if managers are always inviting their employees to learn."

Three grocers have made the list of the 2019 Best Workplaces in Retail, according to Fortune and Great Place to Work. Wegmans came in at No. 2, while Publix earned the second spot and Nugget Market earned the fifth spot.

The list is compiled from anonymous survey feedback representing over 694,000 employees working in retail in the United States, based on their experiences with their companies, including effectiveness of leaders, company values and ability to reach their full potential.

None of these companies are strangers to Great Place to Work's lists. All three were named to the 100 Best Companies to Work For, regardless of industry, earlier this year. Wegmans and Publix were also named to the Best Places to Work for Millennials list in July.

"It's the only job that I've had that makes me feel like I'm a real contributor to the workplace, not just another worker bee," one Nugget employee told Great Place to Work. "My hard work is noticed and rewarded both with in store awards but also through raises and promotions."

Family-owned Wegmans operates 99 with stores in New York, Pennsylvania, New Jersey, Virginia, Maryland and Massachusetts. The Rochester, N.Y.-based company is No. 16 on Progressive Grocer’s 2019 Super 50 list of the top grocers in the United States.