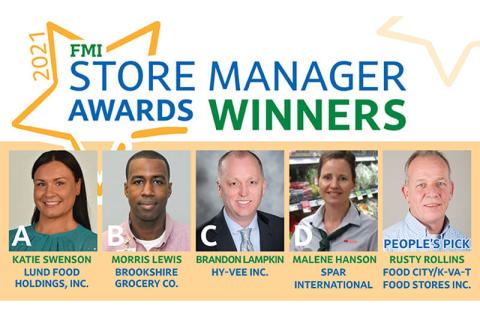 FMI — The Food Industry Association has unveiled the four winners of its 2021 Store Manager Awards. The program features three categories based on store size, an international category and a People’s Pick category. This year’s People’s Pick winner received more than 2,500 votes out of 9,700-plus ballots cast in the online contest.

“In addition to the range of health and operational disruptions the pandemic presented to the food industry this year, the emergency also contributed to a range of related challenges, including active-shooter situations, civil unrest and redevelopment disruption,” said Leslie Sarasin, president and CEO of Arlington, Va.-based FMI. “Each of our 2021 Store Manager Award recipients has a distinct nuance to the variety of challenges encountered and the imaginative means he or she managed to turn these challenges into opportunities. They inspired their employees, motivated their communities and, with their civic-mindedness, served as local reminders of why grocery workers were designated as essential workers during the pandemic.”

The 2021 Store Manager Award Winners were as follows:

Each of the winners receives a prize of $1,000, in addition to a crystal award. The People’s Pick award winner gets a special trophy and $500 to celebrate the winner’s employees. FMI's Store Manager Awards are sponsored by The Coca-Cola Co., based in Atlanta.