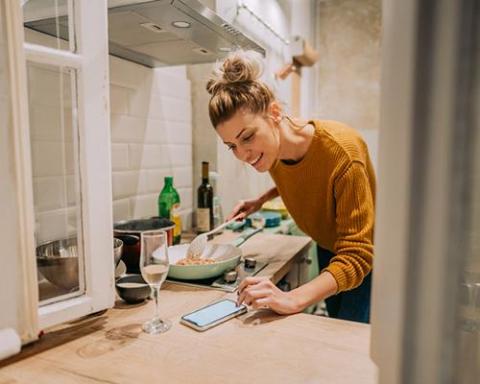 Over the last six months, 36% of consumers have tried at least one new recipe each week, while 64% said they were searching for meal hacks, reheating foods, lost their joy in the kitchen or order takeout.

Sixty-five percent of Americans say they are spending more time in their kitchens than in years past, according to new research.

The findings are part of a new nationwide Kitchen Confidence study from Pampered Chef and demonstrates how Americans are seeking better mealtime solutions and cooking alternatives when they are in a pinch.

“Mealtime is that daily reminder of when expectations meet reality, and while the act of cooking is not the most challenging responsibility in our daily lives, we heard loud and clear that fitting it into our increasingly overwhelming schedules is a struggle,” said Terry Haley, chief marketing officer for Pampered Chef. “The goal with our new content is to ultimately support home cooks, providing tailored tools and tricks that help people feel more confident in the kitchen, so they can focus on what they love most about mealtime: enjoying delicious food together with family and friends.”

Despite one person carrying the majority of cooking duties at home, only about four in 10 (37%) said they feel comfortable and confident in their cooking abilities. Six in 10 credit practice and repetition (60%) and having the right resources to complete a task (56%) for driving higher confidence. Self-expectations of being able to do more or better (44%) — which is stronger for females (48%) than males (41%) — along with too many responsibilities (37%) and lack of time (32%) are the biggest contributors to feeling less confident.

Nearly 30% forget about cooking when they are overwhelmed, indicating that they likely need a cooking solution. Over the last six months, 36% share that they have been trying at least one new recipe each week and are loving it, while 64% expressed they have been looking for meal hacks, are reheating foods, have lost their joy in the kitchen or order takeout. On average, those who believe cooking has become an overwhelming challenge or chore have felt that way for nearly six months, and significantly more females (25%) than males (8%) have felt that way for more than one year. Those with kids under the age of 18 appear to be struggling more in the kitchen and twice as likely to say that cooking has become an overwhelming challenge and chore than those with older children.

Half of the respondents report that a parent (34%) or someone else in their family (16%) primarily taught them to cook, while 16% might just be winging it, claiming that no one taught them how to cook. Interestingly, having a good role model to follow contributes to feeling more confident (33%) and at least 43% seek cooking inspiration from family recipes and traditions. People in the South are significantly more likely (1 in 4) to say they primary learned how to cook from someone else in their family such as grandparents, aunts and uncles, than other regions of the country.

Seven in 10 Americans report that providing a healthy, nutritious meal and enjoying a meal while connecting with loved ones are the most enjoyable phases of mealtime. Only 16% shared that they enjoyed cleaning up the kitchen in comparison to other mealtime phases, with 42% saying it is their least enjoyable task. Yet, respondents (nearly 42%) were most likely to say a clean kitchen is a good reflection of themselves. Interestingly, 43% report that cleaning falls by the wayside when they feel overwhelmed.

The study was conducted by Bridge Market Research LLC on behalf of Pampered Chef in January 2021 with a sample of 1,001 Americans aged 25-54 who take on or share primary cooking duties at home.