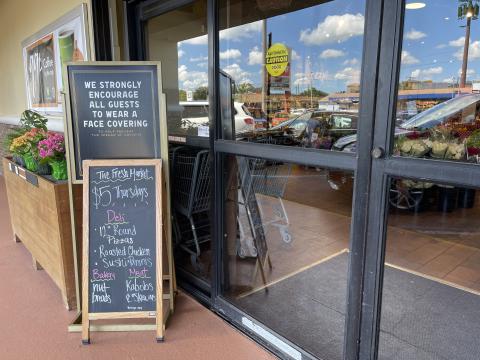 The Fresh Market has put a new sign at store entrances urging shoppers to wear a mask.

A majority of Americans think retailers should be imposing vaccine and mask mandates because of new worries over the spreading Delta variant of the virus that causes COVID-19.

According to a new poll from the Associated Press-NORC Center for Public Affairs Research, most American adults want vaccination mandates for those attending movies, sports, concerts and other crowded events; those traveling by airplane; and workers in hospitals, restaurants, retail stores and government offices.

Roughly 6 in 10 also support vaccine mandates for hospital or other health care workers, along with government employees, members of the military and workers who interact with the public, such as in restaurants and retail stores. Support is slightly lower for requiring vaccinations to go out to a bar or restaurant, though more are in favor than opposed, 51% to 28%.

The poll shows that 41% of Americans are “extremely” or “very” worried about themselves or their family becoming infected with the virus. That is up from 21% in June, and about the same as in January, during the country’s last major surge, when 43% were extremely or very worried.

The poll also shows that 55% support requiring Americans to wear masks around other people outside their homes (such as in retail stores), while 62% support mask mandates specifically for workers who interact with the public, such as at restaurants and retail stores.

Also according to the poll, close to 6 in 10 Americans say they favor requiring people to be fully vaccinated against COVID-19 to travel on an airplane or attend crowded public events. Only about a quarter of Americans oppose such measures.

According to AP, nearly 200 million people, or just over 60% of the U.S. population, had received at least one vaccine dose as of Aug. 19. Just over half of the population was fully vaccinated.