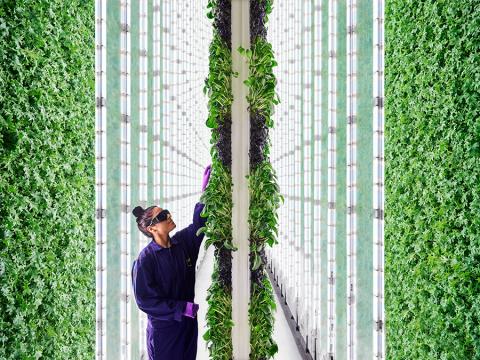 Plenty’s vertical farms are able to control variables like climate and light, while using less than 1% of the land and less than 5% of the water compared with an outdoor farm

Vertical farming company Plenty is boosting the availability of its greens in the Bay Area by joining forces with two major grocery chains: Whole Foods Market and Safeway. Whole Foods locations in San Francisco, including Franklin, Potrero Hill and Soma, and Safeway stores in Menlo Park and Oakland now feature the produce.

Plenty’s greens are also offered by regional operators Andronico’s (which was acquired in 2016 by Safeway, itself a banner of Albertsons Cos.); Good Eggs; Berkeley Bowl; and Draeger’s.

Plenty’s farms are able to control variables like climate and light, while using less than 1% of the land and less than 5% of the water compared with an outdoor farm.

“We’re excited to work with these essential Bay Area retailers to make our craveable produce more widely available,” said Matt Barnard, CEO and co-founder of South San Francisco, Calif.-based Plenty. “Whole Foods Market and Safeway, in addition to Andronico’s, Good Eggs, Berkeley Bowl and Draeger’s, have earned the trust of their customers to provide the best in produce, and we’re honored to be among those selected to be in their stores. As a company with a mission to improve health, we’re happy to be delivering our clean, pesticide-free greens to these communities and will continue to work tirelessly to bring Plenty to more stores across the San Francisco Bay Area.”

Boise, Idaho-based Albertsons Cos., which operates stores across 34 states and the District of Columbia under 20 banners, including Albertsons, Safeway, Vons, Jewel-Osco, Shaw’s, Acme, Tom Thumb, Randalls, United Supermarkets, Pavilions, Star Market, Haggen and Carrs, as well as New York-based meal-kit company Plated, is No. 3 on Progressive Grocers’s Super 50 list of the top grocers in the United States. Under its Whole Foods Market banner, Seattle-based Amazon is No. 10 on the list.