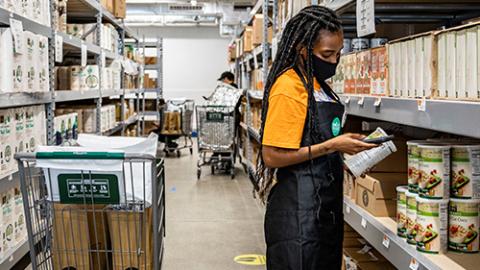 According to Forbes, COVID-19-related bonuses, along with career development, volunteer programs, and a commitment to environmentally friendly practices and products, have helped attract new workforce entrants at Whole Foods Market.

Forbes has teamed up with market research company Statista to identify America's best employers for new graduates. Surveys of 20,000 Americans with less than 10 years' professional experience were conducted from March to June, and the 2020 list includes the 250 companies that came out on top.

In the No. 1 spot for the first time ever is Whole Foods Market, which moved up 39 positions since 2019. Trader Joe's, which held the top spot last year, moved to No. 2.

Other food retailers named to America's Best Employers for New Graduates 2020 List include:

“Attracting and retaining top talent is a priority for us,” said Maria Brous, director of communications at Lakeland, Florida-based Publix, which rose 24 spots from No. 45 last year. “We are dedicated to developing and growing our associates at all stages of their careers and are honored to be considered a top employer by new graduates.”

Forbes appeared to give a bit of a disclaimer as it released its 2020 list: "The ranking features some companies whose appearance on this list, in light of recent events, might come as a surprise, but they are a reflection of the feeling of their own workforces at the time they were surveyed."

Owned by Amazon, Austin, Texas-based Whole Foods is No. 24 on The PG 100, PG's 2020 list of the top food and consumables retailers in North America. Seattle-based Amazon is No. 2 on the list, while Monrovia, California-based Trader Joe's is No. 28 on the list, while Publix, San Antonio-based H-E-B and Rochester, New York-based Wegmans rank Nos. 12, 17 and 36, respectively.