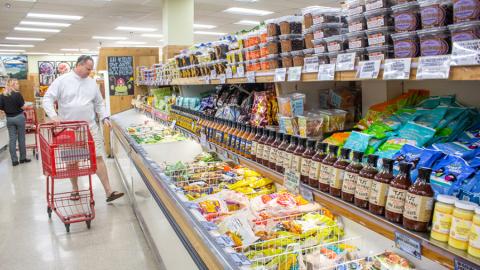 Trader Joe's was included in the Axios-Harris Poll 100 for the first time this year.

The grocery industry made a good showing in the 23rd annual Axios-Harris Poll 100 list of the companies with the best corporate reputation. Trader Joe’s took the top spot in the ranking, with H-E-B and Wegmans Food Markets also included in the top 5.

The ranking is based on a survey of more than 33,000 Americans conducted March 11 - April 3. According to Harris Poll, the two-step process begins with a survey of the public's top-of-mind awareness of companies that either excel or falter, and those 100 "most visible companies" are then ranked by a second group of Americans across the seven key dimensions of reputation. Those dimensions include trust, vision, growth, culture, ethics, citizenship, and products and services.

Amazon and Walmart are considered the two most visible companies in the U.S., followed by Apple, Facebook, Google, Target Corp., Nike, Microsoft, McDonald's and AT&T. Trader Joe’s and Big Lots are among the businesses included on this year’s list for the first time ever.

"As Americans move on from COVID, they are looking at corporate reputation through a more practical lens," said John Gerzema, CEO of Chicago-based The Harris Poll. "Companies delivering on time and keeping their promises despite supply chain issues are being held in high regard. Businesses that also do their part to create a better world – whether through sustainability or taking a stand on authentic social issues – also are being rewarded."

The Kroger Co. and Publix Super Market were also among the top 25 companies, with Kroger coming in at No. 19 and Publix taking No. 25. Costco Wholesale Corp. and Target were also in the Top 50, and Dollar Tree, Big Lots and Walmart were among the other most visible companies.

"To excel at reputation, companies must deliver high marks on business performance, corporate character and trust," said Ray Day, vice chair of Stagwell, which includes The Harris Poll. "While you can build a brand, you earn a reputation. Companies with strong reputations have a price advantage, a competitive advantage and a talent advantage. That's why reputation needs to be a priority from the board room to the C-suite."