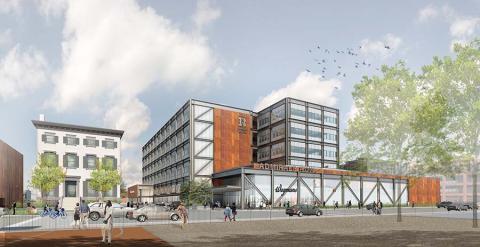 Wegmans Food Markets has begun hiring and training associates for its eagerly anticipated inaugural New York City store, which will be located within the Brooklyn Navy Yard on Flushing Avenue in the Admirals Row development. Slated to open this fall, the store will be staffed by about 500 employees, including 150 full-timers, with the majority of employees to be hired locally.

“Here at Wegmans, you drive your own development, and the opportunities are truly what you make of them,” noted Brooklyn Store Manager Kevin Cuff, who joined the Rochester, N.Y.-based company for 21 years ago when he was 16. “You are more than just a number. You are a family member who has a voice and an opportunity to do whatever it is you are passionate about.”

The 74,000-square-foot Brooklyn supermarket will feature a second-floor mezzanine with seating for almost 100 at the in-store market café. The mezzanine space will also offer a bar serving food, wine, beer and spirits. Like its fellow Wegmans stores, the location will have a European open-air market look and feel, and provide such items as thousands of organic options and restaurant-quality prepared foods.

Wegmans first revealed its intention to build the store back in 2015.

Besides Brooklyn, the grocer is set to open two other locations in 2019, both, like the Navy Yard store, in brand-new markets: Virginia Beach, Va., and Raleigh, N.C. Regarding North Carolina, in addition to the 104,000-square-foot Raleigh store that will open this fall in Midtown East Shopping Center on Wake Forest Road near Interstate 440 and include a Burger Bar, among other features, Wegmans plans to open four additional locations in the state in Chapel Hill, Wake Forest, and two sites in Cary. The company has already begun hiring and training for the Raleigh supermarket as well.

Family-owned Wegmans operates 98 stores in New York, Pennsylvania, New Jersey, Virginia, Maryland and Massachusetts. The company is No. 14 on Progressive Grocer’s 2018 Super 50 list of the top grocers in the United States.