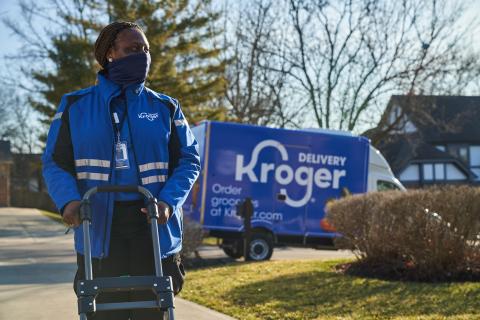 Kroger "Feed Your Future" program offers workers up to $3,500 a year toward education and development opportunities.

Since the federal government’s unemployment benefits expired in September, millions of out-of-work Americans have been faced with having to figure out their next career opportunity this fall. As prospective workers try to determine their career path going forward, they will be looking for jobs that, besides paying well, emphasize career development, innovation and long-term growth.

For decades, the grocery industry has provided just those opportunities, with the vast majority of food retail industry executives starting their careers as baggers or stock clerks and working their way up the corporate ladder.

Despite grocery store jobs being viewed as “starter roles” for many Americans, the food retail industry has invested heavily in retaining and growing its workforce. In fact, a recent study conducted by FMI and Deloitte found that more than 90% of food retailers and product suppliers say they are investing in the future of their workers, with more than 40% indicating they are building an organizational culture that celebrates growth, adaptability and resilience.

For example, Wegmans – which has long been considered among the best places to work – has the Wegmans Scholarship Program, which has more than 42,500 employees furthering their education since its founding in 1984. In addition to their traditional scholarship program, Wegmans also started the Wegmans Work Scholarship program in 1987, which aims to improve graduation rates for underserved high school students. Aside from a range of great benefits, including health care coverage, 401K contributions and competitive wages, Wegmans employees also have the opportunity to grow their skills through various development programs and internships.

Kroger also introduced in 2018 the “Feed Your Future” program, which offers workers an education benefit of up to $3,500 a year – or $21,000 over the course of their employment – toward education and development opportunities. The program is a benefit for both the grocer and its employees as it allows workers to grow in skills, remain with Kroger and advance within the company.

And Walmart embeds training and on-the-job development into the associate experience. Walmart has built over 200 physical Academies to provide advanced training and has launched LiveBetterU, in which Walmart pays 100% of the cost for tuition and books to help associates earn a college degree.

Food retail companies are not just looking to hire stock clerks and cashiers; they need highly skilled, highly qualified individuals to fill myriad roles that might not immediately be associated with your local grocer. For example, as supermarkets continue to evolve into destinations for health and well-being, demand for roles such as dietitians has soared. These positions also have significant earning potential, garnering annual salaries that average around $64,000.

While the pandemic may have changed how supermarkets approach self-serve stations, food retailers have adapted to changing consumer demand for healthy grab-and-go meals by establishing “ghost kitchens.” This development has increased demand for chefs, managers and logistics personnel who make and deliver these convenient, ready-to-eat, prepackaged fresh foods to customers. And if you’ve ever seen a professional athlete cutting the ribbon at a new grocery store or seen a local baseball team sponsored by a supermarket, that is the work of a sports marketer hired to form relationships with everyone from the local Little League leaders to NBA and NFL executives.

Like the rest of the world, the retail food industry is being affected by the rapid changes in technology – meaning that just like Silicon Valley, it needs to hire experts like data analysts and digital technologists to set up and monitor innovations like digital payments portals, cashless checkouts, and the hand-held devices used to track inventory. Besides roles that require computer science or engineering degrees, grocery stores also seek customer service representatives with soft skills to handle the services that can’t be automated, such as those associated with online orders or self check-out.

The grocery industry is a place where workers can begin their careers, but also one that can encompass their entire careers. With our country’s economic recovery still far from complete and millions of Americans looking for their next career move, job seekers should seriously consider the food retail industry as a place where their varied skillsets are not only needed by the communities the grocers serve but are also valued and invested in by their employers.