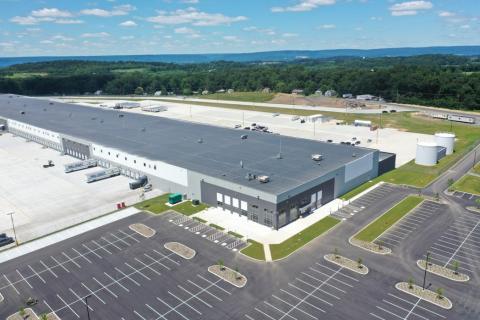 Walmart's automated consolidation center in Pennsylvania joins a similar facility that was built in California in 2019.

Walmart, Inc., is readying a high-tech consolidation center that will utilize automation to add efficiency to the retailer’s supply chain. The facility is being built in Lebanon, Pa., and is expected to open later this month.

The 400,000-square-foot consolidation center is the second of its kind in Walmart’s supply chain and will have the capacity to service all 42 regional distribution centers across the U.S. It will employ nearly 1,000 people, with 500 having already been hired, and its automated technology can enable three times more volume to flow throughout the center.

“We’ve made continued investments in our people, facilities and technology to ensure we have the right product, in the right place, at the right time,” said Mike Gray, SVP, supply chain operations at Walmart. “As part of these investments, the Lebanon facility will provide even more opportunities for small to medium sized suppliers who do not ship nationwide, the ability to provide product to all 4,700 Walmart stores.”

The retailer announced earlier this year that it would expand its commercial agreement to implement Symbotic’s robotics and software automation platform in all 42 of Walmart’s regional distribution centers in the coming years. This is an expansion of Walmart’s earlier commitment to deploy the Symbotic System in more than 20 regional distribution centers.

“Walmart is creating the future of supply chain — a modern system that pairs the latest in software and automation technologies, with a highly trained and specialized workforce of Walmart associates — to disrupt the industry as we know it,” said David Guggina, SVP of innovation and automation, Walmart U.S. “It’s an exciting time to join our second high tech consolidation center in Lebanon. At this facility, we’re implementing the technologies Walmart will continue to roll out throughout our supply chain network.”

Each week, approximately 230 million customers and members visit Walmart’s more than 10,500 stores and numerous e-commerce websites under 46 banners in 24 countries. The company employs approximately 2.3 million associates worldwide. Bentonville, Ark.-based Walmart U.S. is No. 1 on The PG 100, Progressive Grocer’s 2022 list of the top food and consumables retailers in North America.