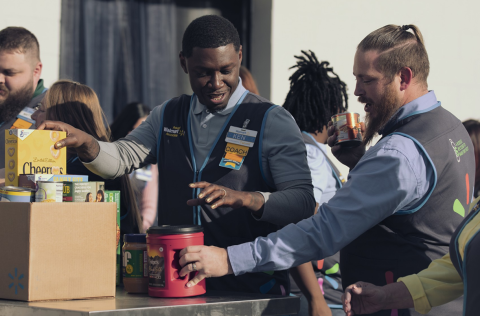 Walmart and Sam's Club have partnered with Feeding America to donate food to those in need since 2006.

Walmart Inc. and its Sam’s Club division are doing their part to fight hunger by partnering with local Feeding America member food banks, and recently hit a milestone of 7 billion pounds of food donated since the program began in 2006.

Using numbers from the United States Department of Agriculture (USDA), Walmart equated 7 billion pounds of food to 5.5 billion meals, which is enough to feed every person in America to eat three meals a day for five days.

“To give you a sense of scale, in one year during the pandemic, about 60 million people turned to the charitable food system for help. And our network provided 6.6 billion meals,” said Feeding America CEO Claire Babineaux-Fontenot. “With that understood, it gives you context to the extraordinary partnership that we have with Walmart and Sam’s Club – the largest donor of food in our whole network.”

Walmart launched the Fight Hunger. Spark Change. campaign nine years ago to bring awareness to hunger issues within its communities, and partners with its associates, customers, members and suppliers. That program, separate from its Feeding America partnership, has donated over 1.5 billion meals to those in need.

“In addition to food donations and strengthening the charitable meal system, we aim to tackle this in other ways, including offering access to low-cost, nutritious food at our stores and online pickup and delivery,” wrote Walmart VP of Philanthropy Julie Gehrki in a company blog post. “Through philanthropy, we support organizations developing innovative approaches to food access and increasing people’s confidence in eating healthier meals.”

Sam’s Club, a division of Bentonville, Ark.-based Walmart Inc., operates nearly 600 clubs in the United States and Puerto Rico. Walmart operates about 10,500 stores under 48 banners in 24 countries, and e-commerce websites, employing 2.2 million-plus associates worldwide. Walmart U.S. is No. 1 on The PG 100, PG’s 2021 list of the top food and consumables retailers in North America, while Sam’s Club ranks ninth.