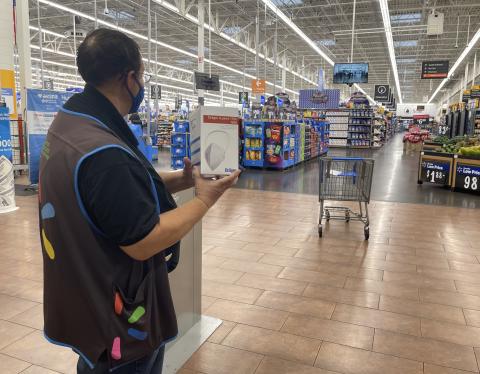 Walmart has been distributing free N95 masks to shoppers in its stores.

Americans continue to cram Walmart's physical and digital stores, in a sign that higher prices and inventory challenges are not dampening consumer enthusiasm for shopping.

For the fourth quarter ended Jan. 28, U.S. same-store sales (excluding fuel) at Walmart were up 5.6%. The retailer said comps reflected strong in-store traffic aided by robust consumer spending and a strong holiday. Comp sales were up 14.2% on a two-year stack basis, and January was the strongest month of the quarter. Traffic was up 3.1% during the quarter, and average ticket was up 2.4%.

“We had another strong quarter to finish off a strong year," said Doug McMillon, CEO of Walmart. "We have momentum in our business in all three segments. We’re being aggressive with our plans and executing on the strategy. It’s exciting to see how the teams are simultaneously navigating today’s challenges and reshaping our business.”

“Walmart’s Q4 2021 earning report reflects continued growth but was impacted by supply chain issues, labor shortages and inflation," said Lauren Lang, senior manager at San Francisco-based Constructor. "Walmart’s continued investment in cutting-edge technology and e-commerce capabilities is continuing to pay off and has positioned them to weather these setbacks. Walmart can double down on their e-commerce site as labor shortages continue to impact in-store shopping experiences. But to be successful on the digital side, Walmart must ensure they’re delivering relevant and tailored shopping experiences, especially at a time when customer expectations for e-commerce are at an all-time high. With a comprehensive, thorough search and discovery strategy, Walmart can drive revenue and boost customer loyalty.”

The company said it saw $400 million in higher than expected supply chain costs during the quarter but that it navigated pandemic-related challenges well while executing strategic initiatives. It said inventory was up 26% globally; 28% in the United States, affected by higher cost of goods, mix and higher in-transit shipments.

During the quarter, Walmart remodeled more than 140 stores; it plans to remodel 600 stores in fiscal 2022. The retailer now has grocery pickup in 4,600 locations and same-day delivery from 3,500 stores. The company said the number of  customers utilizing Walmart's delivery services has increased six-fold compared to pre-pandemic.

In January, Walmart and Quest Diagnostics announced they will offer consumer-initiated laboratory testing powered by QuestDirect. The new solution enables people to take control of their health care and purchase through a consumer-friendly website the same high-quality lab tests ordered by health care providers. This offering builds upon a long-standing relationship between Walmart and Quest to increase access to high-quality health services.