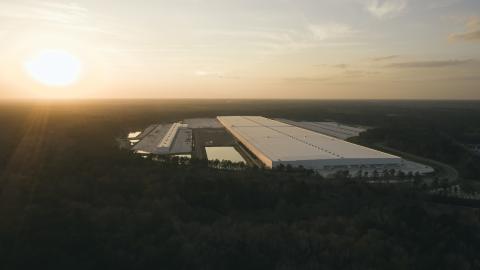 A 3 million-square-foot facility – equivalent in size to 52 football fields – is Walmart’s first import distribution center in the state of South Carolina to leverage the Port of Charleston.

Walmart has opened a $220 million import distribution center in Ridgeville, S.C. The April 22 grand-opening event featured remarks from South Carolina Gov. Henry McMaster and Mike Gray, Walmart’s SVP supply chain of operations, along with a congratulatory video from John Furner, president and CEO of Walmart, and ended with a ribbon-cutting ceremony.

“Our team of more than 980 associates from Dorchester County and the surrounding communities are excited to officially open the doors to our new import distribution center,” said Jeff Holzbauer, general manager of the new facility, at the event. “South Carolina is home to some of the country’s most convenient and efficient modes of transportation, including the Port of Charleston and Interstates 26 and 95. Being a member of this community means having the advantage of the region’s existing infrastructure as well as a pool of experienced associates familiar with it. Cutting this ribbon today signifies our commitment to that community.”

“Walmart has been a long-time partner of South Carolina, and as years have passed, they have continued to double down on their commitment to our people and reinvest in our state,” noted McMaster. “Walmart hasn’t only created thousands of jobs in our state – it has become an integral part of the communities in which it operates. Today’s celebration is the result of our state working hard to be the ideal place to do business and a company recognizing the benefit of having our incredibly skilled workforce and premier ports system in its backyard.”

Dorchester County was chosen as the location for the facility because of South Carolina’s business-friendly environment and the county’s proximity to the nearby deep-water Port of Charleston. The new import distribution center will store and sort imported goods that arrive through Charleston – the country’s eighth-largest port – for delivery to 850 regional Walmart and Sam’s Club locations across the Southeast. Once fully up and running, the facility is expected to boost local port volumes by about 5%.

“Walmart is the recognized leader in supply chain innovation and performance,” observed SC Ports CEO Jim Newsome. “Having this world-class company choose our market for their seventh import distribution center is the ultimate vote of confidence in SC Ports and in South Carolina, further solidifying SC Ports as a leader in retail distribution. The strategic investments we have made in port infrastructure enable SC Ports to support global retailers’ supply chains. We are thrilled to partner with Walmart to further their growth and impact for years to come.”

“We know our customers count on us for a broad assortment, and this new import distribution center will give us expanded access to seaports, in turn allowing us to deliver a wide selection of merchandise from around the globe,” said Mike Gray, SVP supply chain operations at Walmart. “We also strive to be a store of the community and are proud of how we’ve been able to leverage our investments in supply chain to create economic opportunity and jobs for the Dorchester County area.”

To bolster its supply chain network, the company is building and upgrading distribution and fulfillment centers in various U.S. and Canadian locations.

During the grand-opening event, Holzbauer revealed that the new facility is well on its way to exceeding its initial hiring goal of 1,000. Working with the Department of Commerce, Walmart expects to soon employ more than 1,300 local full-time associates at the facility. The company celebrated its commitment to the community with a contribution of $10,000 to Going Places, an area nonprofit organization that gives bicycles to kids in need.

Located at 1030 Timothy Creek Road, the 3 million-square-foot facility – equivalent in size to 52 football fields – is Walmart’s first import distribution center in the state of South Carolina to leverage the port.

Bentonville, Ark.-based Walmart operates approximately 10,500 stores under 46 banners in 24 countries, and e-commerce websites, employing 2.2 million-plus associates worldwide. Walmart U.S. is No. 1 on The PG 100, Progressive Grocer’s 2021 list of the top food and consumables retailers in North America. The company operates 122 retail units and employs more than 35,000 associates in South Carolina.