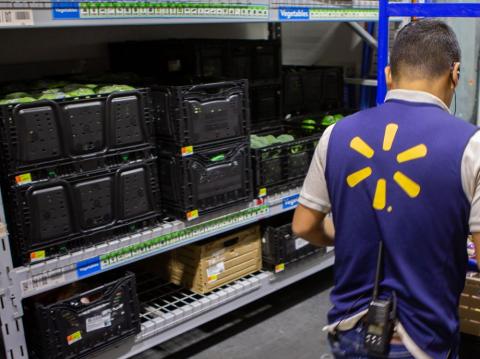 IFCO added features to its RPCs that will not only enhance the visibility of assets in the Walmart network, but also facilitate future innovations in product traceability.

In a move that further improves supply-chain efficiency and labor savings, Walmart has deepened its commitment to sustainability by selecting IFCO Systems as its exclusive provider of reusable plastic containers (RPCs) for fresh fruit and vegetables in the United States.

Under the seven-year agreement, IFCO and Walmart will build upon their longstanding collaboration, which launched in 1998 when the two companies joined forces to introduce reusable packaging in the United States. Walmart suppliers will deliver their produce to Walmart locations using IFCO RPCs. Each RPC will be retrieved after each use and cleaned, washed, sanitized and wrapped before being used again. IFCO RPCs are used up to 100 times before being reground into new RPCs.

According to IFCO, its RPCs use less energy and water and produce less carbon dioxide and solid waste than single-use packaging. They also keep produce fresh longer, are easier to handle and protect produce better than one-way packaging.

“IFCO and Walmart share the goal of an efficient, sustainable fresh food supply chain that helps nourish millions of Americans and billions of consumers worldwide,” said Dan Martin, outgoing president of Tampa, Florida-based IFCO North America. “This agreement is a win for IFCO, a win for Walmart, a win for the environment and a win for millions of grocery shoppers across America.”

“Walmart is committed to providing its shoppers with high-quality, safe, nutritious and affordable fresh food produced sustainably,” said Martin Mundo, Walmart SVP, produce and GPS, “Our new agreement with IFCO helps us deliver on that promise by creating a fresh food supply chain that is more efficient and more sustainable from beginning to end.”

Not only does this agreement with IFCO help lower Walmart’s environmental impact, but it also allows the retailer to streamline its labor efforts by having associates simply place an RPC with produce in designated areas rather than handling each individual item and arranging it in a display.

The RPC program will also include innovations in RPC-tracking technology. IFCO has added features to its RPC pool that will not only enhance the visibility of assets in the Walmart network, but also facilitate future innovations in product traceability.

Further, IFCO RPCs will contribute to Walmart’s Project Gigaton goal to avoid 1 gigaton of greenhouse gas emissions across its supply chain by 2030. When fully implemented, the use of IFCO RPCs is expected to help avoid, on an annual basis, an estimated:

IFCO provides reusable packaging solutions for fresh food to customers in more than 50 countries. The manufacturer operates a pool of 314 million-plus RPCs globally, which are used for more than 1.7 billion shipments of fresh fruits and vegetables, meat, poultry, seafood, eggs, bread, and other items from suppliers to grocery retailers every year.

In Dec. 2020, IFCO partnered with Mexican grower Agros Produce LLC to provide its RPCs in packing and transporting Agros’ tomatoes to retail grocery customers in the United States and Canada.