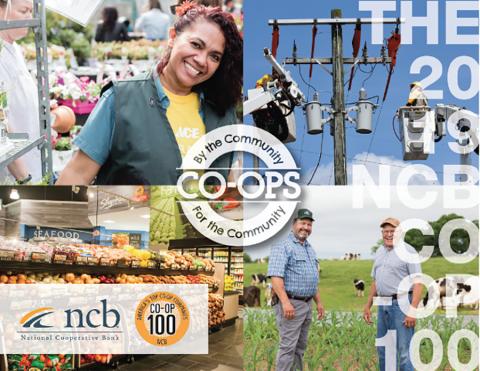 The "NCB Co-op 100" is released every October, during National Co-op Month

“The theme for co-op month this year is Co-ops: By the Community, For the Community,” noted Charles E. Snyder, president and CEO of Arlington, Va.-based NCB, whose mission is to provide financing to foster the growth and expansion of cooperative businesses, while also deploying hundreds of millions of dollars to aid underserved communities and co-op expansion initiatives. “Cooperatives are unique because they operate for the benefit of their member-owners and communities. Having a vested interest in the co-op fosters a natural closeness and accountability between owners/members and management. We know this is a successful and sustainable business practice, since co-ops have been doing it for 175 years.”

In 2018, all of the co-op businesses featured on the list posted revenue totaling about $222.2 billion. Released in October during National Co-op Month, the “NCB Co-op 100” is the only annual report of its kind to track the profits and successes of U.S. cooperative businesses.

American co-ops provide more than 2 million jobs and create more than $75 billion in annual wages, with revenue of almost $650 billion.

The largest retailer-owned cooperative in the United States, Wakefern comprises 50 members that independently own and operate 353 supermarkets under the ShopRite, The Fresh Grocer, Price Rite Marketplace and Dearborn Market banners in New Jersey, New York, Connecticut, Pennsylvania, Maryland, Delaware, Massachusetts, New Hampshire, Rhode Island and Virginia. Together with its member companies, Wakefern, which is No. 8 on Progressive Grocer’s 2019 Super 50 list of the top grocers in the United States, employs more than 70,000 people, and is one of the largest employers in New Jersey.