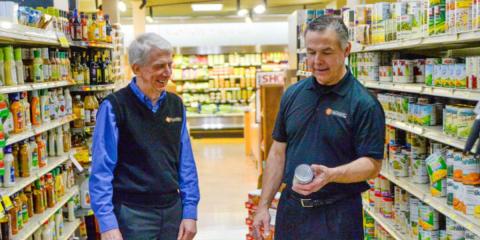 As Minster, Ohio-based Wagner’s IGA celebrates its 100th anniversary this year, the independent grocer is making a huge transition: Former owner Wally Wagner Jr. will retire in the next few weeks, to be succeeded by new owner Leo Braido, who is taking over not only the Minster store, but also two other IGAs previously owned by Wagner. All three locations will remain under the IGA banner.

Wagner, who has taken on a part-time role as he prepares to depart, sold the three Wagner’s IGA locations to Braido last year. Braido is a longtime grocer with more than three decades of experience and the former owner of Ohio-based Oberlin IGA.

“We’re continuing to see more IGA retailers reach their 100th anniversary, and Wagner’s IGA is another prime example of a small business who has established trust and loyalty with its community,” noted IGA CEO John Ross. “The Wagner family has created a remarkable legacy in these towns, and now Leo Braido will be propelling it forward.”

Braido’s planned changes to the Minster IGA include a 50% larger beer department and some upgrades to the deli department.

Wagner’s IGA was founded in 1922 by A.J. Wagner, Wally Wagner Jr.’s grandfather. In 1946, Wally Wagner Sr., A.J.’s son, joined his father in the growing business. The Minster store relocated and expanded before moving to its current location at 257 East Fourth Street in 1979. Wally Wagner Jr. became the third-generation owner in 1997 and was the last family owner of the store. He added locations in Fort Loramie and New Bremen in 2003 and 2013, respectively. Wagner’s IGA has been a member of the IGA since 1954.

“Thinking about all the accomplishments that we’ve had throughout the 100 years is pretty amazing,” said Wagner. “And I think that’s why we kept on moving forward. Our basic principles of customer service and quality products have been the key to our success.”

“It’s really a tribute to Wally and the great job he and his family have done over the years,” observed Braido of the 100th-anniversary milestone. “My goal is to build upon the great foundation that is here and further grow the business and continue to give back to the great communities the stores are located in. I was blessed to have my very first job become my career. While the grocery business is more challenging today than ever before, it’s still a joy to be a part of such a great industry. Whether it’s a good day or a bad day, at the end of the day, I am nothing but thankful for my family and to work in an industry I love every day.”

To mark its first 100 years, Wagner’s IGA held several festive activities at the Minster store, as well as receiving a special visit from  Ross. Along with free food and coffee for customers, the grocer ran a two-week anniversary sale and celebration featuring prize giveaways, including the grand prize of a $1,000 Wagner’s IGA shopping spree.

The celebration included promotions and prizes from some of IGA’s Red Oval partners – manufacturers and service providers with products and services that help IGA retailers and the IGA brand grow and thrive – in addition to many of Wagner’s local vendors. Among the vendor partners were Hershey, The Coca-Cola Co., Pepsi, Minster Bank, Reiter Dairy, Utz Snacks, Smithfield, Alliance Marketing and Caito Foods.

The world’s largest voluntary supermarket network, with aggregate worldwide retail sales of more than $36 billion per year, Chicago-based IGA encompasses 8,000-plus Hometown Proud Supermarkets worldwide, supported by a network of licensed distribution companies and major manufacturers known as IGA’s Red Oval Family partners. IGA has operations in 46 of the United States, as well as more than 30 countries, commonwealths and territories.