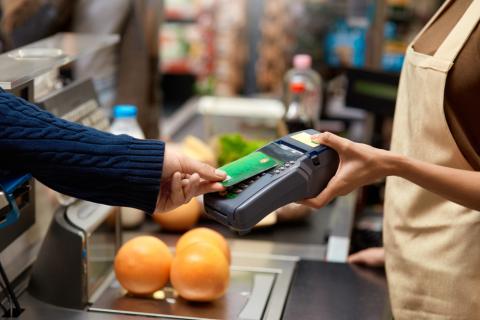 Because credit card swipe fees are a percentage of the transaction, they have a multiplier effect on inflation.

Nearly 1,700 U.S. merchants – including many members of the Independent Grocers Alliance – recently wrote to Congress urging lawmakers to pass landmark legislation that would break a key part of Visa and Mastercard’s hold over the credit card market. For grocers, this issue isn’t news. The National Grocers Association and FMI – the Food Industry Association have been fighting for decades to increase card-processing competition and reduce card processing fees.

In July, Sens. Richard Durbin, D-Ill., and Roger Marshall, R-Kan., introduced the Credit Card Competition Act, which would give merchants the right to route Visa and Mastercard credit card transactions over competing networks like NYCE, Star or Shazam. These networks offer lower fees and better security, but Visa and Mastercard – which together control 80% of the market – block them from handling transactions on their cards. Last month, Reps. Peter Welch, D-Vt., and Lance Gooden, R-Texas, introduced the same legislation in the House.

The news isn’t the longstanding battle to increase market competition, but the blatant misrepresentation of facts by the Electronic Payments Coalition (EPC). Among other false and misleading statements, the EPC claims that merchants didn’t pass the savings along to shoppers when earlier legislation sponsored by Sen. Durbin opened up competition among debit card networks.

The EPC’s statement is simply not true. Since the Durbin Amendment took effect in 2011, it has saved merchants about $8 billion a year, with about $6 billion of that shared with consumers, according to noted economist Robert Shapiro.

Under the Durbin Amendment, the typical debit card swipe fee fell from 44 cents to 22 cents per transaction, reducing the amount that merchants need to charge customers to recover the fee, which is still far too large to simply absorb amid tight profit margins. Government data shows that consumer prices rose only half as much as wholesale prices in the first five years after debit reform – evidence that merchants used the savings to help hold down price increases.

Grocers don’t need a third party to tell us we share every savings we can find with our customers — we know because our margins have been shrinking, not growing, in the past decade. Grocery is the most competitive industry in the nation, and we pass along savings because if we don’t, the store down the street will.

The truth is that Visa and Mastercard have a duopoly that lets them charge retailers whatever they want. U.S. merchants paid $137.8 billion in credit and debit card swipe fees last year, up 25% from the year before and double the amount a decade earlier. The average swipe fee for Visa and Mastercard credit cards is 2.22% of the transaction – the highest in the industrialized world and seven times what’s charged in Europe.

In the grocery industry, independent, family-owned stores are lucky to make a 2% net margin, and credit card swipe fees mean that Visa and Mastercard often make more on a transaction than the store. On some small purchases, grocers might be better letting shoppers take items for free rather than incurring a swipe fee larger than their profit.

Clearly, credit card swipe fees are hurting small business, but it doesn't stop there. Because credit card swipe fees are a percentage of the transaction, they have a multiplier effect on inflation. Economists estimate that these fees drove up prices for the average American family by $900 last year, and that number is likely even higher today. According to one payment consultant, introducing competitive networks to credit cards will save U.S. consumers and merchants $11 billion annually.

The EPC’s rhetoric would be laughable if this issue wasn’t so serious. Trying to persuade Americans that merchants aren’t sharing swipe fee savings with customers is ridiculous when you look at our incredibly small margins. It’s Visa, Mastercard and the banks that issue their cards who are profiting from swipe fees on the backs of consumers. Visa had a net profit margin of nearly 52% last year, while Mastercard’s latest net is nearly 47%, and major card-issuing banks average almost 33%.

The card industry’s mouthpieces – from the EPC to other surrogates – remind me of the dark days of Big Tobacco, which used misdirection and obfuscation to direct lawmakers away from bloated profits and fake research.

Small businesses aren’t asking for a handout or government funding. We simply want justice in an unjust and rigged system. Let’s break the stranglehold that the Visa-Mastercard duopoly has created, open up competition, and let merchants and shoppers take back some of the obscene profit margins of the credit card industry.

The legislation from Sens. Durbin and Marshall and Reps. Welch and Gooden is the right solution. This approach worked when we opened up debit card processing, and it will work again. Small businesses would see relief, shoppers would save money, and the credit card propaganda team could be placed in timeout for telling false stories.