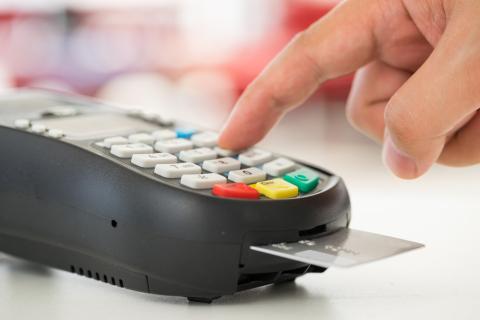 According to the Fed, its final rule on debit card transactions “will encourage competition between networks and incentivize them to improve their fraud-prevention capabilities.”

The food retail industry was heartened by the Federal Reserve’s approval yesterday of new rules clarifying that merchants’ right to choose which payment networks process trillions of dollars in debit card transactions each year applies online as well as in stores and must be honored by banks and card companies. According to the Fed, “The final rule will encourage competition between networks and incentivize them to improve their fraud-prevention capabilities.”

“This is a significant win for our industry, for our customers and for competition,” asserted Leslie G. Sarasin, president and CEO of Arlington, Va.-based FMI – The Food Industry Association. “Now that the Federal Reserve has ensured that at least two networks must be on a debit card, the same competitive marketplace should be allowed on credit cards. We applaud legislative efforts to require at least two network options on a credit transaction to allow competition, just as we have maintained on debit transactions since 2011.”

“This move will bring badly needed competition to our nation’s broken payments market,” said Doug Kantor, executive committee member of the Merchants Payment Coalition and National Association of Convenience Stores general counsel. “When Congress said merchants had the right to route debit transactions to the processor of their choice, they meant all transactions, not just those in stores. The Fed has followed through on Congress’ intent and made it clear that big banks’ evasion of competition must stop. Visa, Mastercard and their bank members should not be allowed to shut out other networks that can do the job more efficiently and more securely.”

Added Kantor: “This ruling is particularly important given the dramatic shift to e-commerce during the pandemic and the increased use of mobile apps and digital wallets for in-store purchases. These transactions account for a rapidly increasing share of our nation’s economy, and the Fed has closed a major loophole that allowed them to escape the competition intended by Congress. Card networks should have to compete the same as any other business.”

The wider retail community was equally enthusiastic about the Fed's clarification.

“The Federal Reserve has declared once and for all that a debit transaction is a debit transaction no matter where it takes place and that merchants have the right to choose the network that offers the best service, strongest security and most reasonable fees,” noted Leon Buck, VP for government relations, banking and financial services at the Washington, D.C.-based National Retail Federation, the world’s largest retail trade association. “Congress ended Visa and Mastercard’s virtual monopoly over debit transactions a decade ago, and this decision makes clear that the law applies the same for in-store and online transactions – the result that Congress mandated in the first place. It’s welcome news that will benefit small businesses and their customers across the nation.”

Similarly, the Retail Industry Leaders Association “strongly supports and commends the Federal Reserve’s clarification issued today solidifying that merchants have the right to route debit transactions for all sales,” said Austen Jensen, EVP, government affairs for the Washington, D.C.-based trade organization. “The failure of Wall Street banks to enable two unaffiliated networks for all debit transactions — whether they occur online or in-store — has been a flagrant violation of the Durbin Amendment for over a decade. The lack of competition has forced retailers to pay outrageous fees associated with debit transactions. Retailers are ecstatic that the Fed acted here to end this egregious practice."

Jensen went on to encourage “the board to quickly put its proposed clarifications into place to ensure issuers will be on utterly unambiguous notice that the Federal Reserve will no longer tolerate their ongoing failure to fully enable merchant routing choice, particularly when it comes to card-not-present transactions.”

The Fed’s new regulations make clear that banks must enable processing over at least one unaffiliated payment network in addition to Visa or Mastercard’s networks, regardless of where a debit transaction takes place; and that neither banks, Visa nor Mastercard can prevent merchants’ access to a competing network. These rules also apply to contactless cards and digital wallets, and address issues such as making sure both in-store and online transactions can be processed over competing networks regardless of the type of authentication used, including signature, PIN, PINless, or biometrics such fingerprints or facial recognition.

The regulations were sought by merchants to ensure compliance with a 2010 law requiring banks to enable all debit transactions to be processed over at least one competing network such as NYCE, Star or Shazam as well as Visa or Mastercard, and that merchants be permitted to choose which network to use.

Last month, FMI and the Washington, D.C.-based National Grocers Association, which represents the independent grocery sector, threw their support behind legislation introduced in the U.S. House of Representatives by Reps. Peter Welch, D-Vt., and Lance Gooden, R-Texas, to require more than one network option on credit cards, giving food retailers and other merchants greater choice in payment routing and fostering innovations in vendor services and fraud protection for merchants and consumers alike. The House bill (H.R. 8874) is companion legislation to the bipartisan Credit Card Competition Act (S. 4674) sponsored by Sens. Dick Durban, D-Ill., and Roger Marshall, R-Kan., earlier this year.