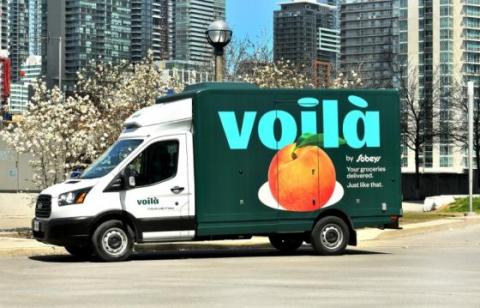 U.K.-based online grocer Ocado has been busy building automated warehouses across North America in conjunction with Sobeys parent company Empire in Canada and The Kroger Co. in the United States. Now, after testing orders for the last two months, the first shopper orders are benefitting from one of these Ocado customer fullfillment centers (CFCs) in the Greater Toronto Area.

Voilà by Sobeys delivers groceries to customers' doors in one-hour delivery windows after ordering online or through the Voilà mobile app. Starting today, customers in Vaughan, Ontario, can use the service, with plans to expand to the rest of the Greater Toronto Area in the coming weeks.

“Voilà by Sobeys is the future of online grocery retail in Canada, and now it’s here,” said Michael Medline, president & CEO of Empire. “Ocado’s technology gives us the best e-commerce platform in the country – there’s nothing like it in North America. We can’t wait to share Voilà with our customers in the GTA this summer and across Canada in the future.”

The CFCs use robots to assemble orders efficiently and safely, resulting in minimal product handling, while Voilà employees safely deliver orders directly to the customer’s home. Voilà offers traditional products that Sobeys carries along with some additional Canadian favorites such as Farm Boy and Well.ca products.

During the coronavirus, Voilà by Sobeys has implemented frequent cleaning and sanitization of warehouse and delivery vehicles, hygiene standards for all teammates, and delivery vehicles equipped with sanitizer and cleaning supplies. Delivery drivers wear face masks upon arrival to homes and change gloves and sanitize in between each delivery. All orders will be left at customers’ doorsteps or in their lobbies for social distancing.

At capacity, Voilà by Sobeys will bring approximately 1,500 jobs to the area, including operations, delivery, and customer service teammates.

A second CFC is currently being built in Montreal to bring Voilà par IGA to major cities in the province of Quebec as well as Ottawa.

In the United States, Kroger and Ocado have announced the locations of nine of the 20 planned automated CFCs to serve its customers. The Monroe, Ohio, facility – the U.S.'s first CFC – is scheduled to make its official debut in early 2021.

Based in Stellarton, Nova Scotia, Sobeys Inc. owns or franchises about 1,500 stores in all 10 Canadian provinces under retail banners that include Sobeys, Safeway, IGA, Foodland, FreshCo, Thrifty Foods, Farm Boy and Lawtons Drug Stores, as well as more than 350 retail fuel locations. It employs more than 120,000 associates. Sobeys is No. 21 on The PG 100, Progressive Grocer's list of the top food retailers in North America.