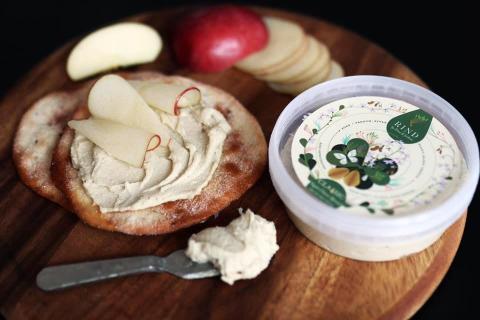 Rind cheese is one of the more than 2,100 vegan items offered by Veg Essential.

Canada-based Vejii continues to make inroads into becoming an online vegan powerhouse. The grocer has signed a definitive agreement to acquire Veg Essentials LLC. Veg Essentials operates VeganEssentials.com, one of the largest vegan marketplaces in the United States.

Vejii recently debuted a website in Canada that offers plant-based meat, dairy and seafood products. The company launched its platform in the United States last November and has been scaling rapidly, growing both its customer base and an assortment of vegan products. At the beginning of April, Vejii partnered with Before the Butcher to sell its Mainstream line of plant-based burger products on the ShopVejii.com platform.

The proposed Vegan Essentials transaction will provide Vejii with an established platform for continued expansion within the U.S. plant-based market that complements its current e-commerce marketplace. Vegan Essentials has one of the longest digital presences and established domain authority in the United States for vegan search terms, which Vejii plans to leverage to support marketing campaigns for both brands, leading to increased marketing awareness and rankings.

The terms of the agreement include a purchase price of U.S. $1.4 million comprising:

Kory Zelikson, CEO of Vejii, said: "We believe that Vejji's acquisition of Vegan Essentials ... provides an established asset to accelerate growth within the growing plant-based market and will solidify Vejii as the market leader for online plant-based sales within the U.S. Vegan Essentials joins the Vejii family with a loyal customer base, established supplier relationships, and distribution channels that will not only enhance Vejii's ability to continue scaling in the U.S., but also help grow Vegan Essentials' reach with Vejii's enhanced tech stack and marketing experience.

"Vejii will leverage over 20 years of consumer insight and data from VeganEssentials.com, as the online grocery market has the potential to exceed traditional retail shopping over the long term and will help fuel our growth for years to come," added Zelikson.

"Vejii's acquisition of Vegan Essentials is not only a significant milestone for the company, but for the plant-based market as a whole,” said Ryan Wilson and Mary Ernster, co-founders of Waukesha, Wisconsin-based Vegan Essentials, in a joint statement. “With this acquisition, we believe Vejii is poised to leverage the rapid growth of the plant-based online retail market, driven by consumer demand, access to new products, and the largest selection of plant-based products in one place."

Begun more than 20 years ago, Vegan Essentials touts itself as the longest-operating cruelty-free retailer in the United States.

Following the successful completion of the transaction, the Vegan Essentials management team will continue to support the transition, driving consolidated distribution and day-to-day operations.

Darren Gill, president of Vejii, noted: "Today marks a milestone moment as Vejii will become the online vegan marketplace with the largest reach between our two brands. Our acquisition of Vegan Essentials will provide a strong platform for the future introduction of vendors and marketing on both ShopVejii.com and VeganEssentials.com, all while leveraging our team, distribution, marketing channels and brand ambassador partnerships, as well as vast consumer insights that have been built through Vegan Essentials' leadership position in the U.S. Based on consumption habits we have seen in the U.S, we believe that over time, U.S. plant-based products sales could grow to in excess of a U.S. $20 billion total addressable market opportunity."

The transaction is subject to customary closing conditions as well as Vejii's receiving a receipt for a final prospectus and obtaining conditional approval for listing on the Canadian Securities Exchange.

Based in Kelowna, British Columbia, and operating its online marketplace ShopVejii.com in the United States through its wholly owned subsidiary Vejii Inc., Vejii Holdings Ltd. is focused on providing its customers with easy access to thousands of vegan and plant-based products in one place. Vejii leverages technology integrations like smart lists, reorder features, subscription programs and AI to enhance the customer experience.