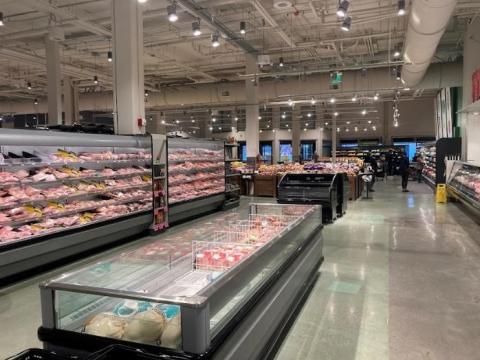 Uwajimaya, one of the largest Asian grocers in the Pacific Northwest, has adopted Honeywell’s Solstice N40 (R-448A) lower-global-warming-potential (GWP) refrigerant for its flagship Seattle store to modernize the facility and improve its sustainable practices.

“Our refrigeration system using R-22 was 20 years old, and we needed to upgrade to a solution that is not only better for the environment, but also energy-efficient, reliable and affordable,” said Miye Moriguchi, Uwajimaya’s real estate and facilities manager. “Solstice N40 provided everything we were looking for in an alternative solution. It met our goals for sustainability and energy efficiency and allowed us to design a completely new system that simplified monitoring and control.”

Based on hydrofluoroolefin (HFO) technology, Solstice N40 offers a GWP that’s about 68% lower than legacy hydrofluorocarbon (HFC) refrigerants such as R-404A. Refrigeration systems using Solstice N40 also consume less energy than their counterparts that cool using HFCs. In U.S. and European supermarket trials, in comparison to R-404A, Solstice N40 demonstrated an average of between 5% to 15% lower energy consumption in refrigeration applications. It can be used in new installations and to retrofit existing systems using high-GWP refrigerants like R-404A and R-22.

Food retailers around the world have relied on Solstice N40 to help them comply with current and proposed regulations. With 60,000-plus installations globally since its 2015 rollout, the refrigerant is the most widely accepted, lowest-GWP, nonflammable replacement for R-404A.

“Solstice N40 is already a leading choice for supermarkets worldwide, and its expanded adoption globally is a sign of growing awareness and action against global warming as customers move away from legacy refrigerants such as R-404A and R-22,” observed Ken West, VP and general manager, Honeywell Fluorine Products. “Switching to this environmentally preferable solution will not only help Uwajimaya with sustainable practices, it will assist in accelerating the industry’s conversion to alternatives that reduce greenhouse-gas emissions.”

Morris Plains, N.J.-based Honeywell is a world leader in the development, manufacture and supply of refrigerants sold worldwide under the Solstice and Genetronbrand names for a wide range of applications, including refrigeration and air conditioning for buildings and automobiles.

Family-owned Uwajimaya is based in Seattle and operates four locations in greater Seattle and Oregon.