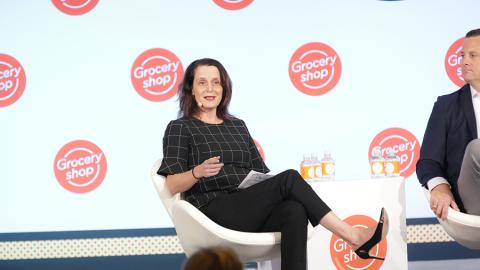 Stores remain the center of Target’s strategy, according to Laurie Mahowald, the retailer’s VP of real estate, but the size of those stores, their location and their assortment are changing.

Sharing a stage at Groceryshop, Sept. 15-18, at the Venetian Resort in Las Vegas, with The Kroger Co.’s VP of real estate, Nick Hodge, Mahowald described a dual-pronged approach to upgrading Target’s core large-format stores while penetrating new urban markets with smaller format-concepts that can be as tiny as 12,000-square feet.

Target recently opened a 33,000-square-foot store in the South Beach area of Miami and a 59,000-square-foot store in West Hartford, Conn., that gave it more than 100 small-format locations. A total of 30 small Target stores will open this year, a pace of expansion that speaks to the popularity of a concept that was only introduced five years ago and represents a new growth vehicle that has become highly selective about opening big stores.

Mahowald didn't comment on whether Target plans to accelerate the pace of small-store openings, but did say the company is “really excited about the flexibility of the real estate and the format.” She also noted that the grocery component in small stores is outpacing larger stores.

That flexibility is evident in some of the real estate choices the Minneapolis-based company has made. Next April, Target plans to open a 20,000-square-foot store on the Las Vegas strip, at a location previously occupied by a Smith & Wollensky restaurant. Flexibility also helped Target open five small-format stores in Manhattan, with the prospect of more to come in Manhattan and the surrounding New York City boroughs.

“We have so much room to grow and better serve those areas," Mahowald said. "We are able to serve an entirely new guest."

Target is also committed to its roughly 1,800 larger stores, recently completed the remodeling of its 500th location in just two years, and is on pace to have 1,000 stores remodeled by the end of next year.

As for Cincinnati-based Kroger, real estate executive Hodge said that the company is excited about some of its experiments, too. It recently opened a small format in Seattle and has plans for locations in Atlanta, Phoenix and its hometown. Kroger’s real estate strategy, like Target’s, also involves leveraging its expansive footprint. Additionally, the company will have grocery pickup available at 1,700 locations this year, which Hodge said required “a lot of heavy lifting to get done in a short period of time."

Another way that Kroger is leveraging its installed base is through partnerships with other retailers, most notably Deerfield, Ill.-based Walgreens. The test, in Cincinnati and Knoxville, Tenn., involved Walgreens health and beauty departments inside Kroger stores, and Kroger branded food departments in Walgreens stores.

Operating nearly 2,800 retail food stores under various banner names, employing nearly half a million associates, Kroger is No. 2 on Progressive Grocer's 2019 Super 50 list of top grocers, while Target, with 1,800 stores and Target.com, is No. 15 on the list.