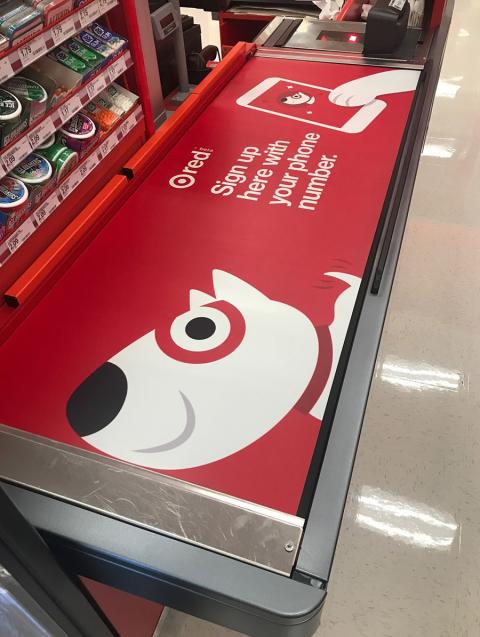 Target Corp. has completed the installation of its 1,000th store with conveyor belt advertising, promoting their major e-commerce and shopper loyalty initiatives.

The advertisements on the conveyor belts at checkout, supplied by MessageWrap, have proven to be an ideal new marketing medium to promote shopper loyalty and bridge the in-store experience with mobile and online shopping.

To promote its Drive Up program, which enables shoppers to skip the checkout line and pick up their order at the store, Target installed MessageWraps in 950 stores this year.  And 50 Dallas-area Target stores now have belt wraps promoting the pilot of the Minneapolis-based retailer's new RED loyalty program.

According to Handstand Innovations, the supplier of MessageWrap, this relatively new marketing medium results in up to 78 percent shopper awareness of the advertisements at checkout. Those results are based on more than 1,200 exit interviews conducted by Saint Joseph’s University Academy of Food Marketing of MessageWrap campaigns at Target, Costco, Ahold Delhaize, Kroger, Giant Eagle and Albertsons in 2018.

“With the unique positioning at checkout and the sky-high awareness and recall rates, a growing number of leading retailers are installing MessageWrap to promote their most important initiatives in loyalty programs and ecommerce offerings.” said MessageWrap CEO Nathan Vanderploeg.  “It's more expensive on an absolute basis, but it’s also the most cost-efficient ad you can put in the store on a cost per recall basis, and it delivers the firepower retailers need to drive real awareness for their most important campaigns.”

In addition to Target, MessageWrap is in use by an increasing number of other retailers to advance loyalty and ecommerce initiatives as well. Recent new MessageWrap installations include programs supporting: Costco Canada’s promotion of its Capital One MasterCard; Ahold Delhaize’s Hannaford Supermarkets campaign for the My Hannaford Rewards loyalty program rollout; Kroger’s ClickList and curbside grocery pickup programs; Albertsons’ just for U mobile integrated loyalty program and same-day delivery service; and Giant Eagle’s Fuelperks+ loyalty program and curbside pickup offerings.

Target Corp. operates 1,800 stores and its ecommerce site, Target.com. The company is No. 13 on Progressive Grocer’s Super 50 list of the top grocers in the United States.