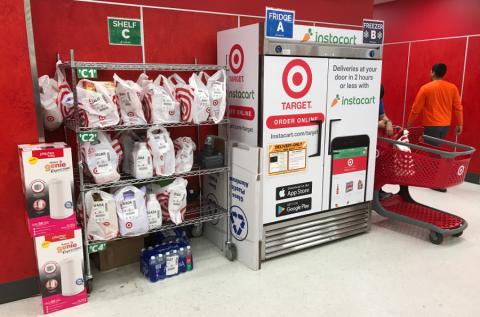 Target Corp. is ending its partnership with Instacart following its acquisition of the San Francisco-based delivery service’s rival Shipt, the Star Tribuneof Minnesota has reported.

Although it hasn't given a time frame for the wind-down, Target eventually will stop using Instacart in the areas where it currently delivers for the Minneapolis-based mass-merchandiser: the Twin Cities, Chicago and San Francisco, three of the 150 total markets where Target delivers the same day. A source told the newspaper that Target accounts for less than 1 percent of Instacart’s entire volume.

Target announced last month that it's paying $550 million in cash for Birmingham, Ala.-based Shipt, which operates in 72 markets, to leverage its own network of stores and Shipt’s proprietary technology platform and community of more than 20,000 personal shoppers to quickly and efficiently bring same-day delivery to customers across the country. The move will bring same-day delivery to customers at half of Target’s stores by early this year, with most stores, as well as stores in all major markets, planning to offer the service before this year’s holiday season.

“We laid out an ambitious strategic agenda in early 2017, which included a focus on giving our guests a number of convenient ways to shop with Target, whether it’s ordering online and picking up in one of our stores, driving up to pick up an order, or taking advantage of services like our new Restock program,” said John Mulligan, EVP and COO of Target, last December. “With Shipt’s network of local shoppers and their current market penetration, we will move from days to hours, dramatically accelerating our ability to bring affordable same-day delivery to guests across the country.”

While the news about Target dropping Instacart doesn’t come as too much of a surprise, it still leaves one question unanswered: How will Target’s ownership of Shipt affect Shipt’s other retail clients, especially Target competitors? At the time of the acquisition’s unveiling, Target stressed that the deal wouldn't affect Shipt’s relationship with other grocers.

“It will be interesting to see how existing retail customers react, as we’d anticipate that some – like Meijer – may be uneasy with the new relationship,” said Brick Meets Click's David Bishop last month, even though the Grand Rapids, Mich.-based retailer – which has been expanding delivery throughout its six-state footprint in the Midwest via Shipt – told Progressive Grocer in December that the change in Shipt’s ownership “will not have an effect” on its customers or relationship with the service. And while chief Shipt rival Instacart may acquire some more business due to the deal, there remains a vulnerability that grocers have when it comes to relying on third-party agreements in this area of business.

“As a result, some grocers may re-evaluate their programs and examine how to bring more of the operational aspects in-house,” Bishop, a partner with the Barrington, Ill.-based retail consultancy, told PG. “This could be a benefit for many of the grocery technology providers who support retailer-specific commerce sites.”