The rapid advance of technology has afforded small businesses the kind of automation and operational advantages that big companies once enjoyed. The process is ongoing and, today, smartphones are replacing expensive mobile and even stationary devices that represented serious investments for grocers.

Apple made a big splash in February, detailing plans to offer Tap to Pay on iPhone, a new capability that will let small and large companies use iPhones to seamlessly and securely accept Apple Pay, contactless credit and debit cards, and other digital wallets. A payment requires only a simple tap on an iPhone, with no additional and expensive hardware or payment terminal needed.

As Tap to Pay on iPhone becomes more widely available, merchants will be able to unlock contactless payment acceptance through a supporting iOS app on an iPhone XS or later device.
Apple isn’t alone in developing smartphone payment tools, however. 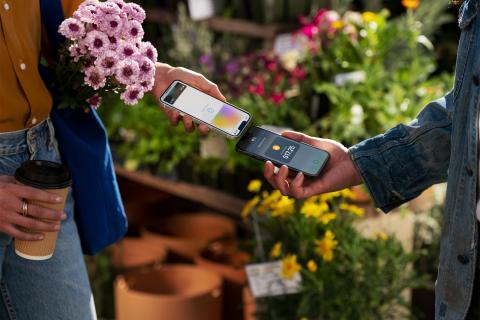 Tap to Pay on iPhone enables businesses to seamlessly and securely accept Apple Pay, contactless credit and debit cards, and other digital wallets through a tap to their iPhone.

NMI, along with Global Payments, introduced a cloud point- of-sale pilot with Mastercard in January 2021, according to Nick Starai, chief strategy officer at Schaumburg, Ill.-based NMI.

“The pilot is still live, and this tap-to-mobile technology turns an Android smartphone or tablet into a payments acceptance device, allowing merchants to accept contactless payments directly to their Android device, without the need for additional hardware,” notes Starai.

“Specifically, the pilot is currently being used on the Los Angeles World Airports Flyaway bus service to Los Angeles Airport,” says Starai. “The fares used to be cash only, but now riders can simply tap their Mastercard on a phone to pay. Additionally, the technology was featured at the 2021 TCS New York City Marathon Expo last November.”

Contactless payment is another technology accelerated by the COVID-19 pandemic. Health is a main concern, given the needs of social distancing and avoidance of potentially contaminated surfaces, but other factors have to be taken into consideration. Any payment system has to have consumer confidence in its security, and most people trust the familiar Mastercard system.

Consumers also need to have confidence in the basic transaction, however, as many people tend to avoid anything new that leaves them feeling awkward. Tap-to-mobile technology is simple and has been evolving at a time when people haven’t been altogether happy conducting transactions in the traditional way.

“Consumers continue to shy away from using cash, and 83% of consumers said they would likely use tap-to-mobile payments if it were offered by a business,” observes Starai. “By requiring nothing more than a smartphone, this technology can be available to businesses of all sizes.”

“In developing this technology, NMI had to determine the best places to ‘tap,’ since this technology uses off-the-shelf Android devices from different manufacturers, with an NFC radio in different spots on the device,” says Starai. “While testing the sweet spot for tapping payment instruments against the tap-to-mobile device, NMI found that each manufacturer had a different area that optimized the tap performance. NMI ended up finding the sweet spot for the different manufacturers and placed stickers on where they should tap to make it easier for users.”

The rollout of tap-to-mobile payments will save larger retailers money and, as Walmart’s giveaway of smartphones to its employees a few months ago demonstrates, the big guys understand that the replacement of dedicated devices with smartphones loaded with their own software can save money and even create opportunity. In some cases, tap-to-pay technology could serve major retailers well, given that it could potentially simplify and reduce the expense involved with off-checkout, curbside garden department and pop-up operations payments.

However, technologies such as mobile tap could be something of an equalizer in the bigger scheme of technical things.

“Technologies like this will greatly impact small businesses,” says Starai. “Many of the pain points that small businesses have with their current payments systems have to do with system setup and onboarding, not to mention expensive terminals. Tap-to-mobile alleviates these hassles with easy integration and no additional hardware beyond a smartphone. This is a game changer for small businesses, as it is the simplest way for them to implement contactless payments, giving customers what they are looking for and helping SMBs compete with larger businesses.”