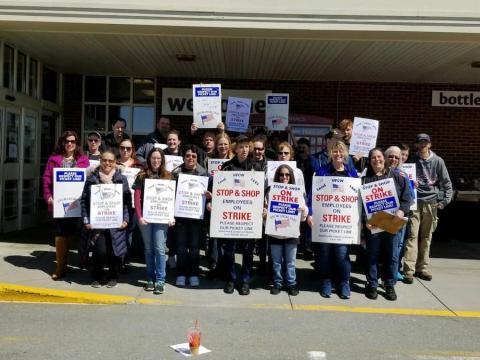 Unionized workers at Stop & Shop stores in Connecticut, Massachusetts and Rhode Island, went on strike on April 11, after contract negotiations failed to result in new contracts.

In February and March, members of United Food and Commercial Workers (UFCW) locals 328, 371, 919, 1445 and 1459, collectively covering more than 31,000 Stop & Shop employees across New England, voted overwhelmingly to authorize their union leaders to call for a work stoppage.

The Journal Inquirer, in Manchester, Conn., noted that the strike was the first in more than three decades for Stop & Shop employees in the region.

“After 35 bargaining sessions with your employer, Stop & Shop, I along with the other presidents of UFCW New England have ordered a work stoppage at all Stop & Shop stores in New England,” noted Timothy M. Melia, president of Providence, R.I.-based UFCW Local 328, on the organization’s website. “What the company has offered as a final proposal does not adequately fund our health and welfare or pension funds, nor does it provide all employees with an opportunity to grow together with the company.”

Added Melia, “We all hope that the company will come to their senses and bring back an offer that will be acceptable and reflect the hard work and dedication that all of you bring to work every day.”

“After months of trying to bargain for a fair contract, it has become apparent that our only choice is to take a job action,” Westport, Conn.-based Local 371 posted on its website. “All New England UFCW members employed at Stop & Shop are on strike at the 253 stores in New England.” The local then listed other grocery stores staffed by UFCW members that shoppers should go to rather than cross the pickets lines at Stop & Shop stores.

“Given that negotiations with assistance of the federal mediators are continuing, we are disappointed that the UFCW chose to order a work stoppage in an attempt to disrupt service at our stores,” Quincy, Mass.-based Stop & Shop responded in the “Labor” section of its website. "Stop & Shop has contingency plans in place to minimize disruption.”

According to The Boston Globe, these plans include temporarily closing some stores and deploying corporate employees as well as temporary replacement workers.

The grocer noted that it “has proposed a good and reasonable offer to our union locals,” which includes across-the-board pay increases for all associates, continued “gold-level” health care benefits for eligible associates, and higher company contributions to UFCW’s defined benefit pension fund for current full- and fester part-time associates —the last of which Stop & Shop characterized as “a rare benefits in the New England food retail industry.”

According to the grocer, in contrast to its offer, the locals “proposed a contract that would increase the company’s costs, [which] would make our company less competitive in the mostly non-union New England food retail marketplace.”

Despite this impasse and the resulting strike action, Stop & Shop said that it “remains ready and available to meet with the union locals at any time. We are committed to good-faith bargaining and hope to reach new contracts as quickly as possible that both recognize and reward the great work of our associates and enable Stop & Shop to compete effectively in the rapidly changing New England grocery market.”

Stop & Shop employs more than 61,000 associates and operates 400-plus stores throughout Massachusetts, Connecticut, Rhode Island, New York and New Jersey. Its parent company, Ahold Delhaize USA, is No. 4 on Progressive Grocer's 2018 Super 50 list of the top grocers in the United States.