Limbacher stepped down from his role and into retirement following more than 44 years of service to Stater Bros. However, Reed's promotion also comes due to the executive's proven leadership, outstanding contributions to the grocer's expansion efforts, and demonstration of the company's commitment to continued growth.

In his new role, Reed will continue to oversee the real estate and property management divisions, as well as the refrigeration and maintenance departments, in addition to Stater Bros.' in-house construction company, Stater Bros. Development, Inc. He will report to Stater Bros. President George Frahm.

"Mike is a well-respected and valuable member of our Stater Bros. 'family,'" Frahm said. "His proven leadership and deep knowledge of the retail real estate and commercial development environment will continue to be instrumental to the Company’s success."

San Bernardino, Calif.-based Stater Bros. Markets operates 172 supermarkets and employs 17,000 associates. It is No. 21 on Progressive Grocer's Super 50 list of the top 50 grocers in the United States.

Michael Reed has more than a decade of relevant retail experience 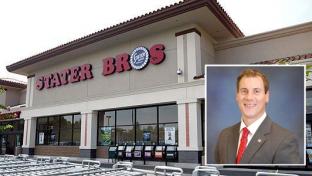