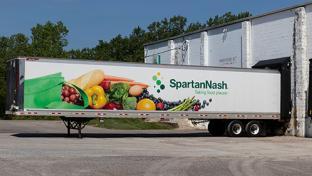 SpartanNash's retail comparable-store sales of 10.6% were positive for the fifth consecutive quarter.

SpartanNash posted a 3.1% year-over-year revenue gain for the third quarter of 2020, with net sales reaching $2.06 billion.

Retail comparable-store sales of 10.6% were positive for the fifth consecutive quarter, the Grand Rapids, Michigan-based food retailer said. The company also reported an adjusted EBITDA increase of 37.2% to $57.0 million, from $41.6 million in the prior-year quarter. During the third quarter of 2020, the company experienced more than 175% growth in its e-commerce business.

Subsequent to the end of the third quarter, the company extended its commercial agreement with Seattle-based Amazon. In connection with this agreement, the company issued stock warrants to a subsidiary of Amazon, subject to certain vesting conditions.

“In the past nine weeks since taking the CEO position, I’ve visited a great number of our distribution centers and retail stores. The passion demonstrated by our associates is nothing short of inspirational,” said Tony Sarsam, SpartanNash's president and CEO. “I am energized and excited about the profitable growth opportunities that lie ahead for our business. As I immerse further into our business, I will continue to assess our long-term strategy, focus on motivating our associates and recognizing their accomplishments, identifying opportunities to make investments to improve the efficiency and effectiveness of our supply chain, and evaluating how to best position SpartanNash to deliver shareholder value for years to come.”

The increase in net sales was generated through higher sales attributable to increased consumer demand related to COVID-19 in the company’s retail and food distribution segments, as well as continued growth with existing food distribution customers, partly offset by the continued impact of domestic base access and commissary shopping restrictions associated with COVID-19 in the military segment.

Gross profit for the third quarter was $324.8 million, or 15.8% of net sales, compared with $290.4 million, or 14.5% of net sales, in the prior-year quarter. The improvement in the gross profit rate was driven by improvements in margin rates at all three segments, as well as an increase in the proportion of retail and food distribution segment sales, which generate higher margin rates than the military segment.

Reported operating expenses for the third quarter were $295.8 million, or 14.4% of net sales, compared with $274.6 million, or 13.7% of net sales, in the prior-year quarter. The increase in expenses as a rate of sales compared with the prior-year quarter was due to increased incentive compensation related to improved company performance, a higher mix of retail segment sales that have higher operating expense rates, higher supply-chain expenses in the food distribution segment, and a $5.2 million increase in restructuring and asset impairment charges, partly offset by increased leverage of retail store labor expenses and other fixed costs due to the higher sales volume in the quarter.

The company reported operating earnings of $29.0 million, compared with $15.8 million in the prior-year quarter. The increase was attributable to increased sales volume, as well as the changes in rates of margin and operating expenses previously mentioned, partly offset by higher impairment charges.

Net sales for military distribution decreased $47.2 million, or 9.5%, to $452.0 million, from $499.2 million in the prior-year quarter. Growth in private label and export sales were more than offset by the impact of domestic base access and commissary shopping restrictions associated with COVID-19, which have led to significant declines in Defense Commissary Agency sales as a whole.

The reported operating loss for military distribution was $2.5 million compared with $2.6 million in the prior-year quarter. The change was driven by improved margin rates, partly offset by higher corporate administrative expenses, the impact of lower sales volumes and, to a lesser extent, increases in the rate of warehousing expenses. Adjusted operating loss was $2.5 million for the quarter in both years.