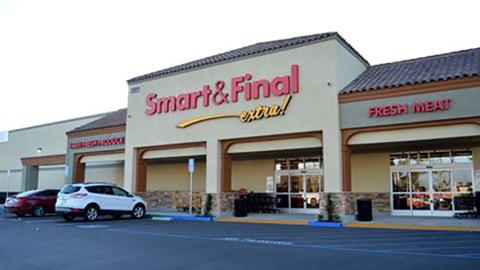 Smart & Final Stores Inc. has posted a net sales increase of 2.8 percent to nearly $1.05 billion, with a comparable-store sales rise of 2.2 percent, for its first quarter of fiscal 2019 ended March 24.

“We had a strong start to the year … despite a challenging operating environment characterized by low product price inflation and severe weather in many of our market areas,” said Smart & Final President and CEO David Hirz. “Our comparable-store sales growth … highlights the value of our differentiated store banners focused on both business and household customers, growth of our private label offerings, our unique warehouse and club-pack assortments, and the success of our ongoing customer service initiatives. We remain dedicated to enhancing our customers’ shopping experience both in-store and online through our investment in innovative new technology and merchandising programs.”

Noting the company’s agreement to be acquired by affiliates of New York-based private-equity firm Apollo Global Management last month, Hirz continued: “The proposed transaction, which is supported by our majority shareholder, is a testament to the strength of our franchise and the talent and expertise of our associates. We look forward to closing the transaction and benefiting from Apollo’s strategic guidance to help accelerate our business strategy and the growth of our two distinct banners as we begin a new chapter in our almost 150 year-long history.”

As well as the rise in gross margin, the company’s Q1 2019 gross margin rate increased to 15 percent from 14.4 percent last year.

Smart & Final reported higher operating and administrative expenses of $155.0 million, up 5.2 percent from the year-ago period’s $147.4 million, which the grocer attributed to expenses associated with the effect of higher minimum wages, eight new stores that opened following the Q1 2018 through the end of Q1 2019, and related support costs.

Commerce, Calif.-based Smart & Final operates 327 grocery and foodservice stores under the Smart & Final (59), Smart & Final Extra! (201) and Smart Foodservice Warehouse Stores (67) banners in California, Oregon, Washington, Arizona, Nevada, Idaho, Montana and Utah, with an additional 15 stores in northwestern Mexico operated through a joint venture. The company is No. 20 on Progressive Grocer’s 2018 list of the top grocers in the United States.