Birdie & Louie launched SKUs of wet food on the cat side first in July.

When it comes to trends in the pet food aisle, new products looking to elevate the dining experience for consumers’ furry friends are popping up frequently. Plant-based, artisanal, holistic and fresh are just a few of the attributes that a new generation of pet parents are seeking as pet adoption and spending keeps rising, kick-started by the pandemic.

According to the ASPCA, one in five American households has acquired a dog or cat since the beginning of the COVID-19 crisis. Millennials and Gen Z make up 53% of those numbers. As a result, spending on pets is on the rise, growing 19.3% to $123 billion last year, and it’s anticipated to grow 10% annually until 2026. And Gen Z and Millennial pet owners are likely to spend more on their pets.

One of the top attributes that pet parents are looking for is quality sourcing. Pet owners want to know where the ingredients for a dog or cat food are sourced, the cultivation standards, country of origin, etc. They also want to know that they can count on finding the product on the shelf when they need it, no matter how many deadly viruses or geopolitical conflicts may arise. Those are just a few of the reasons that Bo Worthy, who owns Eclectic, Ala.-based Worthy Promotional Products, is launching a new cat and dog food brand.

“Over the past year, I began to notice there was a little less cat food on the shelf, and we started getting phone calls from grocers asking if we could do a pet food,” Worthy recounts.

So Worthy got on a plane to South America.

“We ended up in Monte, which is considered the tuna capital of the world,” he continues. “It’s on the coast of Ecuador, right at the equator. And it’s where the southern cool currents come up from Chile and Peru, and the northern warm currents come in from Mexico and the Northern Pacific. It’s just great fishing waters.” Worthy and his son quickly put a deal together to source tuna for a new pet food line called Birdie & Louie.

“Ecuador as a country is a great source of protein because of the issues going on right now in Ukraine,” Worthy says. “The war has caused uncertainty in the grain markets. A typical bag of dry pet food averages 25% to 30% grain, and if we get into a grain situation, we’re going to feed humans first. And so the grain market is going to really tighten up on the pet food industry.” 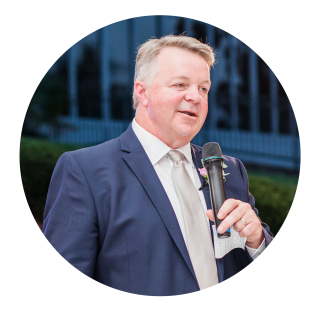 Portrait of an American Entrepreneur

“We know how to bring a product line to life in a hurry,” Worthy explains. “We don’t have committees.”

Worthy is the quintessential American entrepreneur. He went to college at Auburn University and later worked for a company in packaging for eight years. When he was 29, he started his first company with his high school best friend and college roommate, and they owned that company for 14 years.

He later worked with major companies around the United States and sold his first company in 2006. He then started Worthy’s Inc. and began to build his own brands and personal care products, ranging from lip balm to sunscreens, hand lotions and hand sanitizer (which came in handy during the peak of the pandemic, but more on that later).

It wasn’t until 2011 that Worthy got his big break, however.

“We took a little bottle of sunscreen, around 1.5 ounces, to Auburn University to see if they would be willing to sell that in the stadiums for fall football,” he says. “And the guy at Auburn University said, ‘Can you print Auburn on it?’ And I said, ‘Sure.’”

Fast forward to 2020, and Worthy had been selling little bottles of sunscreen and hand sanitizer to stadiums, fan shops — even Walmart. Then, when the pandemic broke, grocers came calling for sanitizer.

“So now we’re dealing with Albertsons, Kroger, CVS, Ahold [Delhaize], everybody, lots of different, large key players, and they’re asking for truckloads, and it elevated us to a [higher] level,” he observes.

According to Worthy, he was able to increase his volume and scale manufacturing not just in the United States, but also in Mexico.

“Suddenly, logistical issues coming out of Asia for all kind of product lines were absolutely chaotic,” he says. “We were able to execute at a really high level with a lot of volume in those first three months. And one of the things I learned during the pandemic is that the consumer does not go to grocery first. They do not go to brick and mortar first. The consumer, when faced with immediate choices, ran to Amazon and bought online that night. Now, they may have bought online as well from some of the other people, some of the grocers and stuff, but it really gave us a first — it gave us a very, very early view into what consumers were thinking.”

Worthy then began to leverage up in other categories such as tissue and towels. Then business went from tissue and towels to sanitizing wipes and all kinds of categories, including other household essentials such as napkins, paper plates, cups and plastic forks.

“Because we had executed on sanitizer, because we had developed a beachhead in Mexico, and we’re a North American sourcing company, grocers began to bring all kind of projects to us,” he explains. “They couldn’t get product out of Asia anymore.”

Worthy notes that all grocers should be more worried about the resiliency of Asian supply chains.

The No. 1 exporter in the world of wet cat food is Thailand, according to Worthy.

“Ecuador is No. 2 in the world on human tuna, but they’re not even in the top 15 on pet,” he adds, “and so Ecuador realizes they’ve got a great opportunity now to step in and grab a large share of the pet market if they can react.”

So far, his new brand is focused on bringing wet cat food to market first.

“If the grain market does tighten up, that market could really [go] sideways,” he observes. “The wet side’s a little bit different. The issues that are causing it to have trouble are deeper and going to be longer-lasting. Everything that we’ve looked at with the wet pet food side, especially cat, but now moving into dog as well, [indicates this]. The wet pet food side is headed toward a 12-, 18- or 24-month elongation of these supply chain issues.”

Birdie & Louie is about more than quality sourcing and supply chain resiliency, however. It’s also about bringing to market a great pet food that discerning pet parents and their cats and dogs will truly love.

“The wet cat food will be a complete and balanced formula,” Worthy asserts. “Tuna is the No. 1 protein that cats like. They love the taste of tuna, and it’s going to be fresh. And we can bring it to market at scale. We’re not talking about just a few little containers. We’re going to bring it at scale and ramp it up.”

“Louie is my fourth cat named Louie,” Worthy says. “For 30 years, every cat I have had I have named Louie, because my mom’s name is Danny Lou and my grandmother’s name is Louise.”

The company put the two names together because “we actually want to do something unique with the brand in the sense that it will serve both as a dog and a cat brand simultaneously,” he adds.

Birdie & Louie launched five SKUs of wet food on the cat side first, in July. On the dog side, the brand will also launch several products, including a chicken-and-turkey formulation in late summer/early fall.