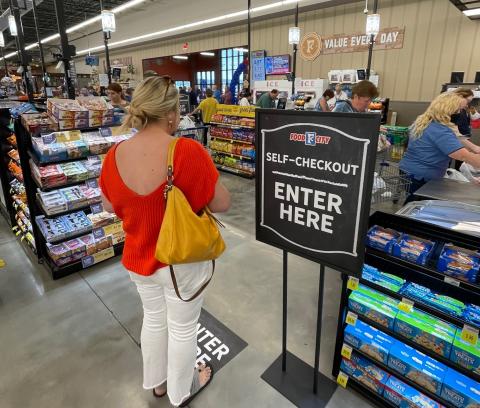 Many retailers, such as this Food City store in Winchester, Tenn., opt for a coral configuration with their self-checkout terminals to aid in labor management while creating unplanned purchase opportunities.

The pandemic accelerated many trends in retail and one of the more notable changes involved dramatic growth of self-checkout.

A record number of self-checkout units were shipped globally last year and in a key shift more than half of the 175,000 units shipped were cashless. That’s according to RBR, a London-based strategic consulting firm that has been publishing its annual Global EPOS and Self-Checkout 2021 report since 2008.

The surge in self-checkout shipments was fueled by the pandemic and the desire of shoppers who did venture out to stores to avoid interaction with others. However, the self-checkout phenomenon has been gathering momentum for years as retailer after retailer, even those who position themselves as service-oriented, began offering the self-checkout option at more stores and in more checkout lanes.

It is a global trend with the way people pay expected to continue to shift. RBR forecasts that by 2026 there will be 1.5 million self-checkouts installed globally. A growing number of those units are likely to be cashless if 2020 is any indication. Cashless terminals accounted for 55% of global shipments last year, according to RBR.

Mainstream grocers in North America continue to expand self-checkout offerings, but the technology is also increasingly offered by other types of retailers, including discounters, convenience stores and pharmacy chains, according to RBR. The firm cited major companies rolling out terminals included variety store chain Dollarama in Canada and drug store chain CVS.

There was also a surge in Europe, including Carrefour, Lidl and Kaufland, who continue to invest heavily in self-checkout technology, according to RBR. Retailers such as Russia’s Pyaterochka and Poland’s Biedronka ramped up their self-checkout rollouts.

Asia-Pacific has the highest penetration of non-cash units, and saw activity jump by a third, boosted by China’s leading retail groups such as Suning and CR Vanguard rolling out self-checkout terminals to more locations. In well-established markets, such as Australia, retailers are replacing previous generation cash units with compact card-only machines, while in cash-heavy Japan, major convenience store chains continue to adopt full self-checkout solutions.