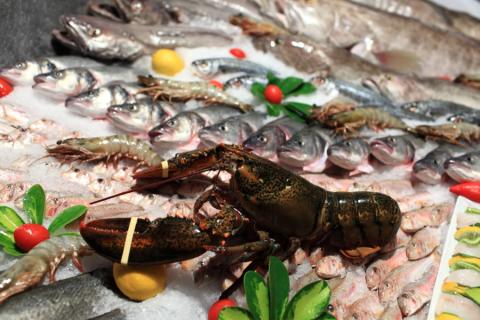 In common with many other departments throughout the supermarket, the trends of nutritious eating and cleaner ingredients are having an impact on the seafood section, creating plenty of potential.

This is especially true given that, despite its currently fashionable healthy halo, Americans’ consumption of seafood remains well below the recommended amount of at least 8 ounces weekly for an average 2,000-calorie-per-day diet, according to the USDA Economic Research Service last October.

Overall, grocers seem optimistic about future profits in the seafood section. According to Progressive Grocer’s 2017 Retail Seafood Review, a substantial 55.8 percent of respondents expect seafood sales to increase this year, while just 3.8 percent anticipate a downturn. Some 40.4 percent of the supermarket seafood executives surveyed by PG for its annual state-of-the-category report believe that sales will remain the same. Although these results convey a continuing confidence in seafood’s ability to deliver the goods, they sound a note of uncertainty unheard in last year’s poll, when not a single respondent predicted that sales would drop.

Is the Price Right?

This more tempered view of the category perhaps arises from actual performance over the past year. During that time, 39.2 percent of respondents saw seafood sales rise, while the majority — 52.9 percent — observed no change and 7.8 percent experienced a sales decline. By contrast, in the previous year, 44 percent saw seafood sales grow, 52 percent said they remained the same and only 4 percent logged a decrease in sales. 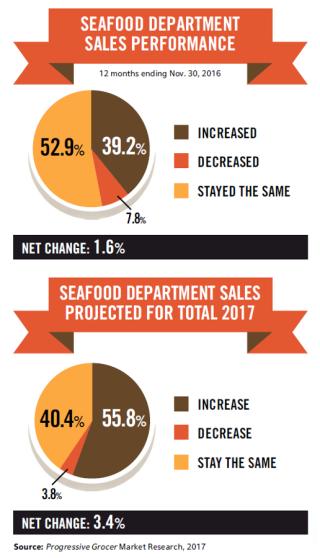 One key reason for this is price, with respondents citing it as a factor in the department’s slower sales. When asked how prices affected the section’s sales, one respondent noted “a downward slide in certain areas of higher-price … fish,” while others observed that “seafood sales have been down due to higher prices,” and that “seafood retails are lower” as a result. Another respondent, although acknowledging that “higher prices on some varieties of fish have resulted in decreased sales or trading off to less expensive fish,” and that “foreign seafood, especially [from] China, has fallen,” also observed that “demand [for] U.S.A., Alaska, Canada [and] Gulf of Mexico country-of-origin [seafood] has increased, no matter the price.” This indicates there’s a segment of loyal consumers willing to pay more for seafood they deem superior.

Shrimp, thanks to an average retail price decline of 8.9 percent, drove total fresh seafood volume, according to Nielsen for the 52 weeks ending Dec. 31, 2016, while crustaceans in general also posted high volume increases from the previous year and the largest average dollar sales increase compared with the prior year.

Another reason for last year’s lower-than-expected sales could be basic lack of consumer knowledge about seafood. Nielsen notes that “consistent consumer education concerning seafood’s benefits and preparation is [a] hurdle to clear” in growing category sales.

Similarly, Jeff Brammer, business unit manager of North American seafood operations at Ann Arbor, Mich.-based product testing, inspection and certification organization NSF International, points out in a recent white paper, “Unraveling the Mystery of Seafood With Transparency and Education,” that the category, “with its supply chain complexity and its lack of familiarity in many markets, is often labeled as risky and mysterious despite the health benefits touted by the medical profession.” As a result of this, Brammer believes, “Many consumers often walk away from seafood as their protein choice because they feel it is too complicated.”

When it comes to what customers are demanding from seafood departments, this year’s Retail Seafood Review recorded some interesting shifts. For one thing, U.S. wild-caught seafood swam straight to the top of the chart, with 57.4 percent seeing increased demand for it, from its fourth-place spot last year. In its wake were value-added products (up from fifth place), value-priced items (down one spot), free-from products (also down a rung), and smaller portions/pack sizes (last year’s No. 1).

The triumph of wild-caught seafood may well have something to do with its perceived higher quality among certain consumers, in keeping with the finding of a 2015 Omnibus survey by New York-based market researcher Edelman Berland that 53 percent of those who prefer wild-caught seafood believe that it tastes better than farm-raised options. Indeed, farm-raised seafood came in at sixth place, with 26.5 percent of respondents noting more demand for it, while 19.1 percent said that demand had fallen.

In the area of effective promotional activities, temporary price reductions continue to rule the waves, with seafood executives giving them a 4.40 rating — a slight decline from last year’s 4.90 — on a 1-to-6 scale. Otherwise, respondents have been rethinking the efficacy of their core strategies over the past year, as BOGOs have shot up to second place from fifth, and product demos/sampling events have descended a notch to the third most successful promo. Rounding out the list are mix-and-match bundles (up from No. 10 last year), flash sales (down two rungs), social media (up a notch), point-of-purchase information (down from fourth place), direct mail (holding steady at No. 8), cross-promotion within the store (down from sixth place) and online marketing (down a spot).

Among other tried-and-true approaches, a number of respondents cited advertising, particularly in newspapers; in-store signage; and couponing, both digital and traditional, as important parts of their promotional budgets. 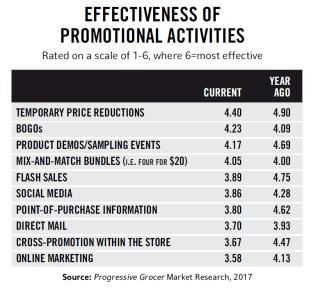 Although it wasn’t mentioned by Retail Seafood Review survey participants, communicating a product’s sustainability would appear to be a wise move, since a 2016 survey by London-based nonprofit Marine Stewardship Council (MSC) found that 72 percent of seafood consumers agreed that to save the oceans, shoppers should consume seafood only from sustainable sources, 68 percent said that people should be prepared to switch to more sustainable seafood, and 54 percent asserted that they would pay more for a certified sustainable seafood product.

To that end, although he concedes that “[f]or sellers at the end of the chain, [adopting a sustainability program] becomes more challenging when trying to align ecological scheme parameters with company goals and objectives,” NSF International’s Brammer notes, “Price may be the No. 1 factor today for consumers, but with proper communication and knowledge provided at the point of sale, this pendulum can shift toward sustainability, social accountability and quality.”

Not surprisingly, when asked what they would request from suppliers to improve their seafood departments, many participants in PG’s survey responded that they wanted better pricing, as well as greater promotional support. One respondent specifically requested “lower pricing on less popular fish to get people to try more and build sales slowly.” 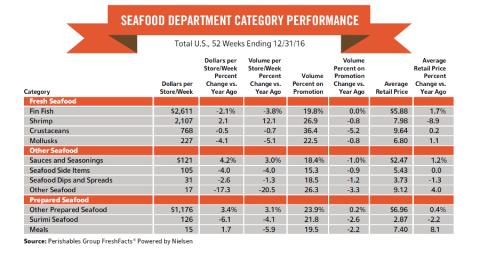