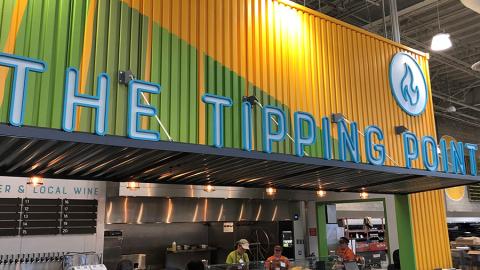 The Tipping Point will debut inside Save Mart's new flagship store opening Oct. 2

The Save Mart Cos.’ flagship Save Mart store, opening Oct. 2 in the grocer’s hometown of Modesto, will include a fast-casual restaurant, The Tipping Point.

The eatery, offering both indoor and outdoor garden seating, will serve barbecued tri-tip steak five different ways: wet or dry sandwich, torta, taco, or salad with street corn, churros and other favorite side dishes. Diners can also opt for a whole tri-tip.

The Tipping Point will also provide wide selection of local beer and wine on tap. The beer and wine selections will change seasonally, with bulletins to that effect going out to followers of the store’s Facebook page.

“We have a strong identification with how good food brings people together—and tri-tip is a staple in the Central Valley,” noted The Save Mart Cos. CEO Nicole Pesco. “The Tipping Point gives the community a new gathering spot to enjoy this amazing food in a comfortable atmosphere—and you won’t have to clean the grill at the end of the evening!”

In the next few weeks, the restaurant’s food menu, as well as other signature prepared foods from  the new store’s hot bar and service deli, will be available for on-demand delivery via DoorDash.