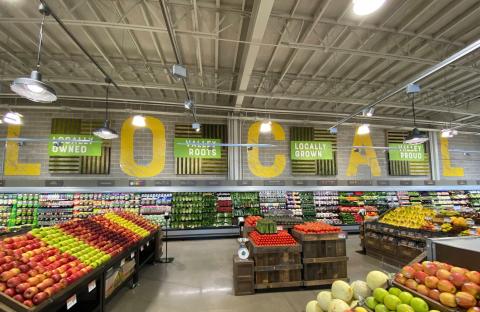 The Save Mart Cos. operates 207 retail stores under the banners of Save Mart, Lucky/Lucky California and FoodMaxx.

The Save Mart Cos. has launched a campaign to support the American Red Cross's efforts during a historic outbreak of wildfires in California.

Save Mart's Round Up The Change fundraiser, in which shoppers can round up their change at checkout and donate the difference to American Red Cross Fire Relief, is now underway at all of company's banners. Shoppers are welcome to donate more than just the change to support their fellow neighbors and Californians affected by the devastating fires. Each donation will be printed on the receipt for a record of the tax-deductible donation.

“This is a quick and easy way for our shoppers to help support the heroic work being done by the American Red Cross in communities throughout California ravaged by the active wildfires,” said Hal Levitt, Save Mart's SVP of retail operations. “The Save Mart Cos. is dedicated to helping the communities in which we serve and the Round Up The Change fundraiser allows us to help our friends, family members and neighbors in their time of need.”

A historic spate of California wildfires has so far displaced hundreds of thousands during a pandemic, killed seven, destroyed at least tens of thousands of structures, burned through the equivalent acreage of a small state, and sent plumes of smoke over several regions, forcing millions indoors during a heat wave.

The American Red Cross has helped provide safe shelter for residents who have been displaced by the wildfires as well as meals, health services, comfort and other support for affected residents. The American Red Cross Fire Relief works with disaster response partners to coordinate ongoing relief efforts and develop longer-term recovery plans.

The Save Mart Cos. operates 207 retail stores under the banners of Save Mart, Lucky/Lucky California and FoodMaxx. The Modesto, California-based company is No. 49 on The PG 100, Progressive Grocer’s 2020 list of the top food retailers in North America.